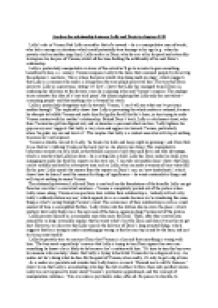 ﻿Analyse the relationship between Lally and Doris in chapters 8-10 Lally?s role in Vernon God Little resembles that of a coward ? he is a manipulative man of words, who lacks courage in situations which could potentially bear damage to his ego (e.g.: when his poverty stricken mother rings him). Lally resides in Doris, who he uses at his disposal and ostensibly to disguise his despise of Vernon, whilst all the time fuelling the artificiality of his and Doris?s relationship. Lally is particularly manipulative in terms of the extent he?ll go to in order to gain something beneficial to him, i.e.: money. Vernon compares Lally to the horse that scammed people by observing the audience?s reactions, ?this is where the horse would stop doing math on stage?, which suggests that Lally is a conman who makes a living from the way people perceived him. The way that Doris perceives Lally as a great man, stating ?it?s love?, shows that Lally has managed to pull Doris in, rendering her oblivious to the obvious scam he is playing at her and Vernon?s expense. The analogy to me connotes this idea of a ?one trick pony?, the idiom implying that Lally only has one talent ?scamming people- and that anything else is beyond his reach. ...read more.

The truth surfaces when Vernon finds out that ?that?s right, - ?care? ? I had the cards printed for Lalo?, showing that Lally is the one who has left these people, and his own mother, with nothing. Lally continues his fakery when the story is surfaced, making up an excuse and ?he pauses to dab a finger at the corner of his eye?, suggesting his actions are counterfeit and mean nothing, and he?s using Doris to gain money. Lally?s tone with Doris is artificial and fake. ?Well Hi baby? shows that the idiolect of Lally when speaking with Doris is tasteless and insipid, implying that Lally is a trite man yet Doris still can?t see this. ?I see a love poem from Lally to mom? shows that the love and bond Doris and Lally share is tacky and a waste of time ? there is nothing there except the hold Lally has over Doris. Lally describes Doris in a way which satisfies her appetite for a perfect image, ?hot and sweet, like my woman?, and so this makes Doris happy that she ostensibly appears to be this enviable woman Lally is describing her as. ...read more.

?My ole lady was never honey bear like this with my daddy? shows that the sight of Lally and Doris together sickens Vernon, because she never treated his father like how she?s treating this new man who?s just flounced into their lives. ?Mom throws her head back and laughs? further suggests that all of this is fake, because she?s trying to present an illusion of being happy and will hold onto anything, i.e.: Lally, who supports this image. To conclude, the relationship between Lally and Doris is one formed from the way in which he can embezzle benefits from being with Doris, in return satisfying her need for a perfect image and the want to be loved. Pierre conveys this in many ways, namely the tone of language between Doris and Lally, which is full of artificialities and tasteless affection. Lally is portrayed as manipulative but also as a coward, and Doris is expressed to be a character that is oblivious to the scam of Lally, also rendering her to have an aspect of artificiality. If we consider Vernon?s interior monologue, we can also discover the contempt and disregard he has for Lally because he has him figured out and knows he?s out to get him and his mother. Conclusively, all of this results in Vernon being metaphorically stabbed in the back from both Lally and his own mother, yet again. ...read more.