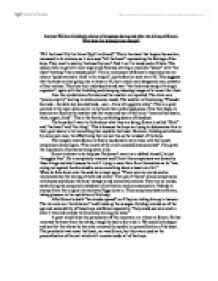 Analyse William Golding's choice of language during and after the killing of Simon. Why does the language use change?

Analyse William Golding's choice of language during and after the killing of Simon. Why does the language use change? "Kill the beast! Cut his throat! Spill his blood!" This is the chant that begins the section, increased in its violence as it now says "kill the beast" representing the feelings of the boys. They want to destroy the beast but can't find it as it is inside each of them. This causes them to get ever more angry and frenzied, starting a ritualistic "dance" with "the chant" beating "like a steady pulse". This is reminiscent of Simon's experience earlier when a "pulse started to throb in his temple", just before he went into a fit. This suggests that the boys are also going into a trance or fit, but a much more dangerous one, unaware of their actions. ...read more.

However, Golding calls Simon by name just once, the effect being that we see this as the mindset of the boys. The imagery when Simon is finally murdered is very vivid, with the mouth comparison drawn again, "The mouth of the circle crunched and screamed". This gives the impression of someone being eaten alive. Simon is shown to be helpless. He doesn't even try to defend himself; he just "struggles free". He is completely innocent and Christ-like comparisons are drawn by these things and also because he is still trying to save them from themselves as he "was crying out against the abominable noise something about a beast on a hill." When he falls down onto the sand he is leapt upon. "There were no words and no movements but the tearing of teeth and claws". ...read more.

The parachutist was never the beast, nor was Simon, but they were used as the personification of the evil which still remains inside all of the boys. After the rain ends, the mood completely changes, from frantic and urgent to calm and serene. The "incredible lamps of stars" "cool...clear air" make Simon's death seem peaceful, natural and spiritual. The images are of "silver" "phosphoresce" "pearls" "clear water...clear sky" "strange moonbeam bodied creatures". These all give a heavenly, spiritual and peaceful feel as does the alliteration of 's' sounds; "Softly surrounded by a fringe of inquisitive creatures, itself a silver shape beneath the steadfast constellations." This makes Simon's death seem beautiful and the violence of the reality unimaginable. Golding uses the violent, urgent, frenzied language during Simon's death to show the feeling surrounding it. He uses the calm, peaceful and spiritual language afterwards, when his body is carried away as a reminder as to the kind of person Simon was and how different he was to the others. ...read more.

This is a very well reasoned essay that shows a competent analysis of language in William Golding's 'Lord of the Flies'. The candidate makes a good use of their analytical skills by honing in on specific words and phrases that ...

This is a very well reasoned essay that shows a competent analysis of language in William Golding's 'Lord of the Flies'. The candidate makes a good use of their analytical skills by honing in on specific words and phrases that set the tone of the novel. As an allegorical novel, much symbolism is used not just in the story but also in the way it is written, and the candidate has sensitively appreciated this, though the flaws in this essay really lie within the structure. The candidate's analytical structure often hinders their points, preventing this essay from eliciting the full five stars because some of the analysis feels unfinished and/or unconvincing due to a lack of insight into how to effectively structure the essay. More on this in the next section.

The Level of Analysis is promising, and to a great extent is indicative of a very high achiever; figure a solid B grade for the efforts here. Alas, a lot of the structuring means that the candidate does not explicitly answer the question until the last few paragraphs. A lot of the time the earlier paragraphs end with what looks to be the start of a PEE/C (Point, Evidence & Explanation/Comment) e.g. - "This gives the impression of someone being eaten alive." The comment is fair, but if it were to pin-point exactly what tone this language has and how it relates to the question it could be even better and more succinct. The candidate would be looking to say something like "The language Golding uses during the scene of Simon's death is violent, dark and far more harrowing than the contrastingly serene over-use of sibilance (repetition of 's' sounds) in the scene just after his death", and then should go on to elaborate using examples from the text.

The Quality of Written Communication is good as far as I can tell. No obvious spelling mistakes have been made, nor is their any cause for concern at the misuse of grammar and punctuation; the candidate uses speech marks appropriately and even semi-colons, which is a real indicator that the candidate in confident in their use of the English language. A few more linguistic terms such as "narrative", "discourse" or "fricative" could aid the essay in scoring higher in the English terminology marks.