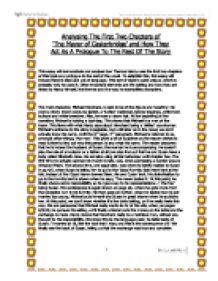 Analysing The First Two Chapters of 'The Mayor of Casterbridge' and How They Act As A Prologue To The Rest Of The Story.

Analysing The First Two Chapters of 'The Mayor of Casterbridge' and How They Act As A Prologue To The Rest Of The Story This essay will demonstrate and analyse how Thomas Hardy uses the first two chapters of this book as a prologue to the rest of the novel. To establish this, this essay will include Hardy's style and use of language. This sort of style is quite unique, which is probably why he used it. Other important elements are the setting and how they are linked to Hardy himself, the themes and the way he exemplifies characters. The main character, Michael Henchard, is said to be of fine figure and 'swarthy'. He wore a short, brown corduroy jacket, a 'fustian' waistcoat, tanned leggings, white horn buttons and white breeches. Also, he wore a straw hat. At the beginning of the narrative, Michael is holding a tool-bag. This shows that Michael is a man of the trade. This flows with what Hardy says about Henchard being a 'skilled' countryman. Michael's entrance to the story is palpable, but until later on in the novel, we don't actually know his name. Until the 6th page, 3rd paragraph, Michael is referred to as, amongst other things, 'the man'. This gives a bit of suspense as the reader wishes to read further to find out who this person is and what his name. The reader discovers that he is indeed the husband of Susan; the woman he is accompanying. He doesn't play the role of a husband or a father at all (we also find out that he and Susan have a baby called Elizabeth-Jane. He remains using similar behaviour until chapter two. The first time he actually opened his mouth to talk, was, when addressing a worker around Weydon-Priors. The second time, one page later, was when he briefly replied to Susan in pg 4/5, when Susan is telling him to go to the 'Good Furmity Sold Here' tent at the fair, instead of the 'Good Home-brewed Beer, Ale and Cyder 'tent. ...read more.

He probably used that word as he replied negatively to anything Henchard asked. Then, he mentions the Fair Day; the only way of getting any money in most cases. We learn quite a lot about Wessex and the way of life there in the first few pages of Chapter One. This is due mainly to the turnip-hoer. From him, we learn that there is a shortage of jobs. Due to the time setting, it is quite obvious to those with knowledge of history, that it is the time of the Industrial Revolution. The chronicle fits in efficiently with the time setting, '...before the nineteenth century had reached one-third of its span...'; this was during the pinnacle of the Industrial Revolution - 1709 to 1853. We then discover that homes are being knocked down to make way for the industrial buildings. Therefore, life must be quite hard for the working-class. This is shown by the turnip-hoer saying how there is a lack of employment; lack of money. We know this because, Weydon-Priors is at the threshold of being an industrial city. The only way of making money outside the industrial side, it seems, is to work in the Fair or sell horses. The Fair is packed with people and full of life. Different activities and different fairs to visit, for example, toy-stands, waxworks, medicine men, and so forth. Hardy uses a varied form of vocabulary in this text, but most of the book uses a sophisticated range of vocabulary. Examples of sophisticated choices include: Hardy uses this wide range of lexis effectively to make an effective description of an object or person. By using efficient language, Hardy creates a good picture in the mind of the reader. He does this by describing something with great detail. For example, when he first introduced Michael, he used great detail in order to produce sufficient imagery. "The man was of fine figure, swarthy, and stern in aspect; and he showed in profile a facial angle so slightly inclined as to be almost perpendicular." ...read more.

He uses varied sentence structure to achieve tension. Although most other writers would use shorter sentences to create anxiety, Thomas uses commas as well. An example of this, is at the end of CH 1. Hardy uses prolonged sentences, but with commas to create a depressing atmosphere. The whole of the story after the auctioning of Susan, is founded on that very act. The main outline of the first two chapters is quite simple. Firstly, the couple enter Weydon-Priors. Then, they visit the Fair and go to a furmity tent. Michael gets drunk and offers to sell his wife, Susan. After much pondering, a sailor approaches Henchard and purchases Susan, who is accompanied by Elizabeth-Jane. Michael, the next morning, realises what he did in his drunken rage. He makes a vow to never touch any spirits for 21 years. Michael finds that he has lost Susan forever, or so he thinks... After the selling of Susan, all of Michael's actions were based on that event. Before CH. 3 continues, a lot time passes; Hardy likes to use time in his writing. As you can see in the brief plot of the story above, all of the actions made reverberated the auction. Michael made a vow due to the auction, he went in search of Susan because of the sale, etc. Hardy cleverly makes an impression in the readers mind at the beginning of the story. This makes the reader want to read further to discover the following events. From this essay, I have learnt about Hardy's style, his use of things like Nature, Time and so on. I have learnt of Thomas' lexis and structure. The overall language he uses is different to other authors in the sense that he uses very sophisticated expression and refers to seemingly irrelevant things to achieve sufficient effects; symbolising. Also, we learn how Hardy develops characters and their identity, e.g. Michael. His description also fluctuates to other publishments, as he refers to things like nature, chance and time; he uses elements that might be relevant to him. He's a unique author. By Surjeet Mann ...read more.