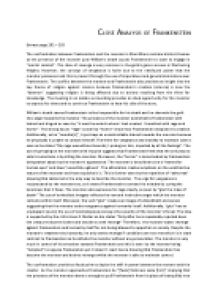 ﻿Close Analysis of Frankenstein Extract page.101 ? 103 The confrontation between Frankenstein and the monster in Mont Blanc contains distinct themes as the presence of the monster post William?s death causes Frankenstein to want to engage in ?mortal combat?. The idea of revenge is very common in the gothic genre as seen in Wuthering Heights. However, the concept of vengeance is futile due to the newfound power that the monster possesses and this is present through the use of imperatives and general dominance over Frankenstein. The conflict between the monster and Frankenstein also provides an insight into the key theme of religion against science because Frankenstein?s creation (science) is now the ?daemon? suggesting religion is being affected due to actions resulting from the thirst for knowledge. The meeting in an isolate surrounding provides an ideal opportunity for the monster to express his views and to convince Frankenstein to hear his side of the story. William?s death causes Frankenstein to feel responsible for his death and he channels the guilt into anger towards the monster. The presence of the monster overwhelms Frankenstein with hatred and disgust as seen by ?it was the wretch whom I had created. I trembled with rage and horror?. The strong nouns ?rage? as well as ?horror? show how Frankenstein despises his creation. ...read more.

The confrontation provides a focal point to depict the shift in power between the monster and the creator. As the monster approaches Frankenstein he ?[feels] faintness seize [him]? implying that the presence of the monster alone is enough to pull Frankenstein from his place of tranquillity into chaos. The power shift occurs due to the physical differences between Frankenstein and the monster. The monster?s superiority can be seen as he approaches at ?superhuman speed? and ?[bounds] over crevices in the ice, among which [Frankenstein] had walked with caution?. The alliteration of ?superhuman speed? creates an emphasis on the sheer superior nature of the monster. Moreover, as Frankenstein struggles to span Mont Blanc, while the monster ?[bounds]? over implies confidence as well as athleticism which Frankenstein lacks. The monster asserts the power and authority via the placement of conditions and through the use of imperatives showing that Frankenstein is no longer in charge. This is displayed by ?Do your duty towards me, and I will do mine towards you and the rest of mankind?. The fact that it mentions ?rest of mankind? suggests that the monster beholds power over humanity itself and this is due to the monster being made from a selection of the best body parts. Also, as he states ?duty? suggests that Frankenstein is indebted to the monster and bound to his command until he fulfils his duty. ...read more.

This is very similar to the Devil as he shames God?s most prized creation (Adam and Eve) and Frankenstein?s creation destroys his family. Additionally, the monster refers to itself as the ?fallen angel?, which is quite ironic as the monster suggests that it has been cast out of ?heaven? however, the fallen angels were wicked angels who had sinned suggesting that the monster isn?t the victim but a sinner. Finally, the extract draws more comparisons with Prometheus which links to Greek religion because Frankenstein harnessing the power of lightning to animate his monster is similar to Prometheus stealing the fire. Then like Prometheus, he also defies the Supreme Being and continues to pursue knowledge (symbolised by fire) until it has fatal consequences and the punishment of Prometheus and the foolishness of Pandora in releasing evil and suffering into the world which is similar to the fall of innocence in Genesis and Frankenstein being a harbinger of doom to the society. Overall, the meeting of the creator and the creation leads to a lot of conflict being raised and it is a key turning point in terms of who is really in power. Moreover, due to the strength of the church during the 1800?s the role of the monster is very controversial and he is portrayed to be the evil creation who betrays its creation. Finally, both the characters seek vengeance, however Frankenstein has become monstrous whilst the monster has become much more sophisticated. ...read more.