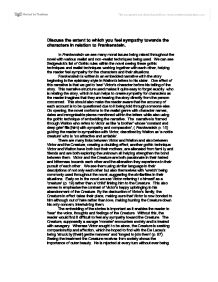 Discuss the extent to which you feel sympathy towards the characters in relation to Frankenstein. In Frankenstein we see many moral issues being raised throughout the novel with various realist and non-realist techniques being used. We can see Sedgewick's list of Gothic rules within the novel seeing these gothic techniques and realist techniques working together with each other, helping the reader feel sympathy for the characters and their situations. Frankenstein is written in an embedded narrative with the story beginning in the epistolary style in Walton's letters to his sister. One effect of this narrative is that we get to 'see' Victor's character before his telling of the story. This narrative structure used makes it quite easy to forget exactly who is relating the story, which in turn helps to create sympathy for characters as the reader imagines that they are hearing the story directly from the person concerned. This should also make the reader aware that the accuracy of each account is to be questioned due to it being told through someone else. On opening, the novel conforms to the realist genre with character names, dates and recognisable places mentioned within the letters while also using the gothic technique of embedding the narrative. ...read more.

He is rejected at every turn without ever being listened to which is why the De Lacey family is so important to him, the blind man is the only person to listen to him and not judge him by his appearance. The Creature's 'heart beat quick' (p. 108) at the time to 'decide my hopes, or realize my fears' (p. 108) guiding the reader to feel sympathetically towards him. Through the Creature's story we learn of his gentleness, almost childlike and innocent and it is only through the treatment he receives from society that he becomes aggressive. The Creature is a result of the rejection of not only his creator, but also that of society. This raises the point of Rousseau's nature verses nurture debate. It is not until the Creature encounters the De Lacey's that he starts to feel lonely, which Rousseau argued that had humanity stayed in it's natural state, much unhappiness would have been avoided. In the Creature's eloquent account of sufferings, it is easy to forget that he is not only a murderer, but a murderer of a child. Some of the most important moral issues raised within the novel are as relevant today as much as when Frankenstein was written. ...read more.

156). Shelley addresses the moral issues within the novel but does not provide any real answers but instead encourages the reader to make their own judgements, something that Forster encourages us to do in focusing 'upon our personal encounter with a novel' (The Realist Novel, p. 21). Overall, the Creature is the one who the reader feels most sympathy for. We see the Creature's birth and the shaping and development of his character helping in creating sympathy for him as it makes him appear more real to the reader. He was created and abandoned through no fault of his own and no matter how hard he tried to become accepted by society, he was unfairly attacked. Victor evokes less sympathy as he continually moans about his situation. Victor comes across as very self-absorbed even stating that Justine 'who on the morrow was to pass the dreary boundary between life and death, felt not as [he] did, such deep and bitter agony' (Frankenstein p. 67). Frankenstein is not only a novel of conflict between Victor and his Creature and that of the Creature and society but also on how we judge people morally and the sympathy we give to them. ...read more.