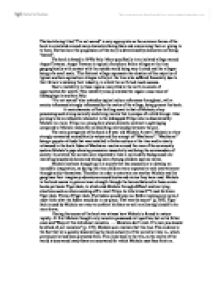 The book being titled "I'm not scared" is very appropriate as the common theme of the book is orientated around many characters facing fears and overcoming them or giving in to them. Furthermore the progression of the story is determined by characters not being "scared". The book is based in 1970s Italy. More specifically in an isolated village named Acqua Traverse. Acqua Traverse is typical of southern Italian villages at the time geographically with contact with the outside world being very limited and the villages being of a small scale. This fictional village represents the situation of the majority of typical southern agriculture villages in Italy at the time who suffered financially due to their failure to develop their industry, in which the north had much success. Due to instability in these regions many fled to the north in search of opportunities for wealth. This instability also provoked the regular occurrence of kidnappings in southern Italy. "I'm not scared" also embodies typical culture references throughout, with a society influenced strongly influenced by the males of the village, being present the book. A main character of this thrilling novel is that of Michele, a boy possessing such strong curiosity and strong morals that is unique of a child his age. ...read more.

Firstly his decision to receive the forfeit that Barbara was initially awarded shows Michele becoming more conscious to what is injustice to and what is virtuous in the world and in general showing that he is becoming morally stronger. Nevertheless when young Michele is confronted by the intimidating and aggressive gang leader Skull about his friendly relations with Barbara, he quickly retreats from showing any more generosity towards Barbara. This is a sign that Michele, even though showing a braver personality than his peers he still finds himself susceptible to being "scared" by certain situations, particularly involving Skull. Michele is faced with few fears prior to the pivotal moment of the book, which is that of Michele's discovery of the kidnapped Fillipo. From this point onwards the innocence of Michele is hastily lost, forcing Michele to mature both physically and mentally if he is to cope in his surroundings. When Michele first meets Fillipo he is terrified of Fillipo and quickly departs yet he does show some bravery when telling himself "I'm not scared of anything"p47 in order to hearten himself to go down the hole. Michele becomes more and more courageous as respects to his frequent crossings with Fillipo and soons feels connected to him to a point that he is given the impression that may have been his brother. ...read more.

This is proven by the fact that he talks of the "wash bears" ,as if they are good friends such as when he says "the little bears told me you're not scared of the lord of the worms"p77., the lord of the worms being Fillipo's kidnappers. Another way in which Fillipo successfully confronts his fears is through simply Michele. Michele is shown throughout to inspire Fillipo to fight back against the kidnappers and escape. An example of this can be seen in the final stages of the thrilling novel during which Fillipo admits he is "scared" of trying to flee from his kidnappers. Michele responds by saying "No you're not scared, There's nothing to be scared of. Hide"p223. These words of inspiration cause Fillipo to overcome his fears and obeys Michele instantly and hides. Michele assists him on other occasions also, most notably his conquering of his fear of sunlight, subjecting pain on his rather sensitive eyes. . In conclusion Fillipo like Michele has also grown up considerably over the course of book, down to his pre-mature "loss of innoncence", he has become a lot braver and has overcome many of his fears in different ways. The dominant female characters present in the novel are that of Theresa (Michele's mother) and Barbara. ...read more.

The essay claims to be an "Analysis of Italian novel 'I'm not scared". Actually it is an analysis of the two boys who are the main characters, their interaction and some of the plot. There is also some useful work on the theme of fear but nothing here about the achievement of the author, his style, his language (in translation) or his management of the elements of the novel, or indeed much analysis of the other characters.

As far as it goes, there is much useful work here on the relationship between these two boys. Quotations are frequently used appropriately to support points, often merged skilfully into the text of the essay, and some insight into the character of the boys is evident.

Paragraph structure is mostly poor and sentence construction is frequently ungrammatical, though some phrasing is good. The lexis is mostly up to the task.