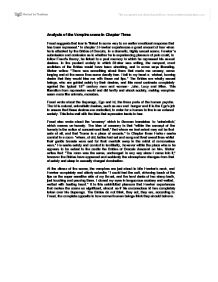 Analysis of the Vampire scene in Chapter Three Freud suggests that fear is "linked in some way to an earlier emotional response that has been repressed." In chapter 3 Hawker experiences a great amount of fear when he is attacked by the Brides of Dracula, in a dramatic, highly sexual scene. Hawker's submission and confusion as to whether he is experiencing pleasure of pain could, to follow Freud's theory, be linked to a past memory in which he repressed his sexual desires. In the prudent society in which Stoker was writing, the rampant, overt eroticism of the Brides would have been shocking, and in some ways liberating. ...read more.

Freud wrote about the Superego, Ego and Id, the three parts of the human psyche. The Id is natural, animalistic desires, such as sex and hunger and it is the Ego's job to ensure that these desires are controlled, in order for a human to live in an ordered society. This links well with the idea that repression leads to fear. Freud also wrote about the 'uncanny' which in German translates to 'unheimlich,' which means un-homely. The idea of uncanny is that "within the concept of the homely is the notion of concealment itself," that where we feel safest may not be that safe at all, and that "home is a place of secrets." ...read more.

At the climax of the scene, the vampires are just about to bite Hawker's neck, and Hawker completely and utterly submits: "I could feel the soft, shivering touch of the lips on the super sensitive skin of my throat, and the hard dents of two sharp teeth, just touching and pausing there. I closed my eyes in languorous ecstasy and waited, waited with beating heart." It is this uninhibited pleasure that Hawker experiences that makes the scene so significant, almost as if his unconscious Id has completely taken over his Superego. The Brides do not think, they act, they are, according to Freud, the complete opposite to how normal human beings think they should behave. ...read more.

Although there isn't a clear question, this essay does well to build some sort of argument. There is a clear focus on the scene being shocking, and then a discussion around why this affects a contemporary reader. I'm not sure ...

Although there isn't a clear question, this essay does well to build some sort of argument. There is a clear focus on the scene being shocking, and then a discussion around why this affects a contemporary reader. I'm not sure I like the focus on Freud, as it seems forced in this case. This shouldn't be an essay on "Freud's criticism applied to Dracula" but rather an analysis of the meanings and techniques used by Stoker.

This essay shows potential in its analysis. I like how this essay shows the ability to weave in context of reception when using phrases such as "In the prudent society in which Stoker was writing, the rampant, overt eroticism of the Brides would have been shocking". Examiners will be looking for this skill, and it will be rewarded well. I would like to see the discussion taken further, and explore why Stoker presents the female vampires as shocking. There is a strong argument that Stoker is warning of female sexuality in the novel, and the shocking nature of the female vampires and Lucy's transformation shows the dangers of promiscuity. However, there is a tendency to retell, and phrases such as "In Chapter three Harker seeks comfort in a room " add nothing to the argument. It's a shame to see assertions made in this essay without textual evidence. There are some great quotes in Chapter Three surrounding the female vampires such as "kisses for all", "voluptuous ruby lips" and "devils of the pit" amongst others. For this essay to reach the top bands, the encounter needed to be analysed more thoroughly.

I don't like the structure of this essay. As mentioned above, it focuses too much on Freud's opinions rather than structuring the essay to look at significant techniques used by Stoker. There needs to be more focus on Stoker's construction, as this would allow a natural progression from retelling the story to analysing specific techniques. The essay does show potential in having a critical voice and being able to use in critical views, but there is a big difference between weaving ideas in and forcing the essay around the views of Freud. Spelling, punctuation and grammar are fine. At times, quotes are much too long and aren't embedded in the text. By using short quotes, it allows you to focus on specific techniques and draws you away from simply retelling the plot.