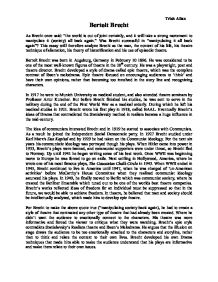 Analyze Brecht as the man, the context of his life, his theatre technique of alienation, his theory of historification and his use of episodic theatre.

Trish Allan Bertolt Brecht As Brecht once said: "the world is out of joint certainly, and it will take a strong movement to manipulate it (society) all back again." Was Brecht successful in "manipulating it all back again"? This essay will therefore analyze Brecht as the man, the context of his life, his theatre technique of alienation, his theory of historification and his use of episodic theatre. Bertolt Brecht was born in Augsburg, Germany in February 10 1896. He was considered to be one of the most well-known figures of theatre in the 20th century. He was a playwright, poet and theatre director. Brecht developed a style of drama called epic theatre, which was the complete contrast of Ibsen's melodrama. Epic theatre focused on encouraging audiences to 'think' and have their own opinions, rather than becoming too involved in the story line and recognizing characters. In 1917 he went to Munich University as medical student, and also attended theatre seminars by Professor Artur Kutscher. But before Brecht finished his studies, he was sent to serve in the military during the end of the First World War as a medical orderly. ...read more.

His theatre was more informative and forced the viewer to critique what they were watching. Brecht's epic style contradicts Stanislavsky's Realism theatre and Ibsen's Melodrama. He argues that the illusion on stage draws the audience to be too emotionally attached to the characters and storyline, rather than to think and relate the context to their own lives. Brecht developed his own Drama techniques that made him able to make the audience understand that his plays are informative and make them relate to their own issues. The use of Alienation in Brecht's plays brings its own unique way of leaving the audience astonished and sometimes a bit confused. It constantly reminds the audience that what they are seeing isn't actually happening here in the real world. Making his theatre paradoxal, Brecht wanted the audience to have their own critical opinion of what they were watching and not just accept the invited reading. The use of Alienation in Brecht's plays means constantly distancing the audience from the emotional status of the play, this includes incorporation of songs, narrative passages, banners and anything that would remind the audience that what they were watching is only acting. ...read more.

Epic or Episodic Theatre is a combination of all the conventions of Brechtian theatre. Such as Alienation and Historification. It was Brecht's response to Ibsen's melodrama. Where instead of emotionally attaching the audience to the character, he used the Alienation technique to change the viewer into a spectator. He also began using 'episodes' to show the passing of time or the parallel time to another issue. This is employed though uses of a narrator, banners and signs, the simple onstage set and the flat white light that creates no extra mood. In The Caucasian Chalk Circle it uses Episodic Theatre to speed up time (the seasons change), jump further into the future (Michael grows up) and parallels time to another event (when the story of Grusha cuts to the story of Azdak). In conclusion, Brecht was successful in manipulating society back through his productions. His unique style of Epic theatre made the audience 'think' rather than to accept the invited reading. This turned the audience into a spectator rather than a viewer and to add their own perspectives and morals to what they just witnessed. He used past events in Historification to allow the audience to make their own decisions on what they would have done to make it better. Brecht's productions were unlike any other. ...read more.