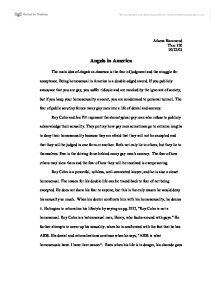 Athena Hammond Thre 120 10/22/01 Angels in America The main idea of Angels in America is the fear of judgment and the struggle for acceptance. Being homosexual in America is a double-edged sword. If you publicly announce that you are gay, you suffer ridicule and are mocked by the ignorant of society; but if you keep your homosexuality a secret, you are condemned to personal turmoil. The fear of public scrutiny forces many gay men into a life of denial and secrecy. Roy Cohn and Joe Pitt represent the stereotypical gay man who refuse to publicly acknowledge their sexuality. They portray how gay men sometimes go to extreme lengths to deny their homosexuality because they are afraid that they will not be excepted and that they will be judged in one form or another. ...read more.

His denial and rationalizations continue when he says, "AIDS is what homosexuals have. I have liver cancer". Even when his life is in danger, his charade goes on. Roy lives on both sides, he is very successful and "socially acceptable", but he has a life that is hidden from his normal social circles. Joe Pitt is a married man who works as a clerk for a federal judge. His marriage is failing and coming apart very quickly. Among other destructive influences, his secret homosexuality is a big part of the problem. He and his wife, Hannah, are barely on speaking terms and have not been intimate with each other in months. He finally succumbs to his sexuality, although it takes him a while to admit this to Hannah. ...read more.

He wants to close his eyes and then when he opens them he will not be gay anymore, or the world would magically change over night and his sexuality would be acceptable to everyone. He does not want to be gay and he has denied it all his life because of fear. But he knows that he has to accept himself and his sexuality. Fear is the only answer as to why gay men live lives in denial. It is the only answer that makes sense. They are afraid they will be deserted by friends, family, and all those close to them. To them, it is not a matter of sexuality but a matter of how they are seen in the public's eye. There is no shame in being who you are, but there is shame in letting the fear of judgment from others control your life. You must accept who you are before you can expect anyone else to accept you. ?? ?? ?? ?? ...read more.