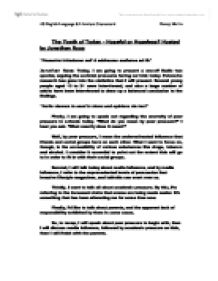 The Youth of Today - Hopeful or Hopeless? Hosted by Jonathan Ross *Presenter introduces self & addresses audience ad lib* Jonathan Ross: Today, I am going to present a one-off Radio two special, arguing the societal pressures facing our kids today. Extensive research has gone into the statistics that I will present. Several young people aged 13 to 21 were interviewed, and also a large number of adults have been interviewed to draw up a balanced conclusion to the findings. *Invite viewers to send in views and opinions via text* Firstly, I am going to speak out regarding the enormity of peer pressure in schools today. "What do you mean by peer pressure?" I hear you ask. "What exactly does it mean?" Well, by peer pressure, I mean the underestimated influence that friends and social groups have on each other. What I want to focus on, though, is the accessibility of various substances like drugs, tobacco and alcohol. I consider it essential to point out the extent kids will go to in order to fit in with their social groups. ...read more.

Wouldn't you all agree? [/stricter tone] *Remind viewers to send in views and opinions via text* Next, I would like to talk about the influence the media can exercise over people. Yes, I said people, not just kids! It is widely recognized that the media wields a very strong grasp over the British public. But the media can, and does persuade children every day to pester their parents into purchasing the latest toy or gadget. What's more is that the media even have the power to make children insecure about themselves. A shocking 95% of females under 21 that I interviewed said they have seen at least one woman in a lifestyle magazine that they would like to look like. This is staggering! The media can also instigate feelings of jealousy and even hatred between kids. We have all heard of the social categories youths place each other in today. Emos. Chavs. Townies. Goths. Research indicates that 75% of kids interviewed said their opinions on other social categories have been formed and/or heavily influenced through their friends' opinions and opinions they see in the media. ...read more.

It's also an efficient way of separating the very bright from the exceptionally intellectual. *Cue 'ad lib' joke from presenter* Finally, I will discuss parents. I will begin with a fascinating statistic; 89% of kids I spoke to stated that their upbringing has moulded them into the person they are today. Now, when we acknowledge that it's their opinions that matter, we see that a parent has the most influence over a child's character. I know it is common practice to point the finger at the parents when a child commits a deplorable act. But, they have to assume the responsibility for their child's actions, for the evidence proves that it is their nurturing which has had the most authority over the child's nature. There are several factors pressurizing kids today, but the absence of a parent's concern or worry for their wellbeing is what a child really takes notice of. I hope all of you listening can relate to this and appreciate what I'm getting at! *Presenter to read out some texts and converse with listeners, attempting to add a comedic finish, recapping on some earlier points* ?? ?? ?? ?? AS English Language & Literature Coursework Kenny Martin ...read more.