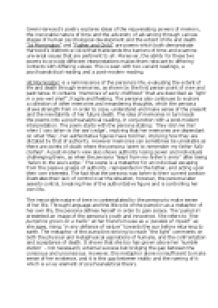 ﻿Gwen Harwood?s poetry explores ideas of the rejuvenating powers of memory, the inexorable nature of time and the adversity of advancing through various stages of human psychological development and the extent of life and death. ?At Mornington? and ?Father and Child? are poems which both demonstrate Harwood?s distinctive voice that transcends the barriers of time and examine universal issues that are pertinent to all. Moreover, the ability for these two poems to provide different interpretations makes them relevant to differing contexts with differing values. This is seen with two variant readings, a psychoanalytical reading and a post-modern reading. ?At Mornington? is a reminiscence of the persona?s life, evaluating the extent of life and death through memories, as shown by the first person point of view and past tense. It contains ?memories of early childhood? that are described as ?light in a sea-wet shell?, fragile and fleeting. The persona also continues to explore a collection of other memories and meandering thoughts, which the persona draws strength from in order to cope, understand and make sense of the present and the inevitability of her future death. The idea of memories in turn leads the poems into a psychoanalytical reading, in conjunction with a post-modern interpretation. ...read more.

Harwood creates a serene image of death, allowing the persona to reach a conclusion about its inevitability and the relevance of her experiences and dreams to it. Harwood?s poem ?Father and Child? is a parallel to ?At Mornington? as it investigates the advancement of human psyche, from the innocence of childhood to the frailty of old age. The poem also observes the human psyche?s attempt to rationalise and resist the inescapable nature of time. Harwood explores the change in human psyche in this poem and suggests that experiences undergone in childhood shape lives and morality in the future. The juxtaposition of settings and syntax is used to convey the evolution of the human psyche and morality. ?Father and Child? is separated into two sections, ?Part I Barn Owl?, which takes place in the persona?s childhood, and ?Part II Nightfall? which is set when the persona has presumably reached middle age, as the father is now 80, blind and dying. The adversity of advancing through various stages of human psychological development is prevalent in ?Barn Owl?. Harwood has used vivid descriptions to portray the callousness and cruelty of the situation where a little girl attempts to shoot a barn owl but fails and harms it dreadfully, causing the owl having had ?dribbled through loose straw tangling in bowels?. ...read more.

It?s as if a string of tenderness was touched by him inside of her which led to the tears. She had learnt a lot of concepts in regards to life from her father and is thanking him for teaching her. However, tears cannot mend the facts of life and death, since everybody has to come to the end of a journey at some stage. She relies on her father?s ?white stick? to take her back to her memories of her father and the lessons learnt ? showing how memories can overcome tears at this last sorrow. The allusion of her father as ?King? is a reference to King Lear, showing her admiration and love for her father and how she still sees him as someone that she can rely on. The use of contrasting tones of the two parts reinforces the ideas of memory and life/death, that after many life experiences, her perspective of her father changes from "an old No Sayer" when the girl is young, to a "stick thin comforter". By valuing texts in different perspectives, responders are able to react to a text on a variety of ways, making them relevant to differing contexts with differing values. ?At Mornington? and ?Father and Child? are texts which transcend the barriers of time and examine universal issues that are applicable to all. ...read more.