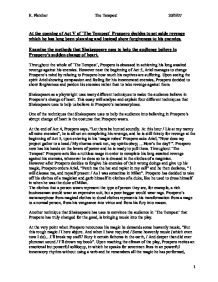 At the Opening of Act V of `The Tempest` Prospero decides to set aside revenge which he had long been planning and instead show forgiveness to his enemies. Examine the methods Shakespeare uses to help the audience believe in Prospero's sudden change of he

At the opening of Act V of `The Tempest` Prospero decides to set aside revenge which he has long been planning and instead show forgiveness to his enemies.

Examine the methods that Shakespeare uses to help the audience believe in Prospero’s sudden change of heart.

Throughout the whole of `The Tempest`, Prospero is obsessed in achieving his long awaited revenge against his enemies. However near the beginning of Act 5, Ariel manages to change Prospero’s mind by relating to Prospero how much his captives are suffering. Upon seeing the spirit Ariel showing compassion and feeling for his incarcerated enemies, Prospero decided to show forgiveness and pardon his enemies rather than to take revenge against them.

One of the techniques that Shakespeare uses to help the audience into believing in Prospero’s abrupt change of heart is the costume that Prospero wears.

At the end of Act 4, Prospero says, “Let them be hunted soundly. At this hour / Lie at my mercy all mine enemies”, he is all set on completing his revenge, and he is still thirsty for revenge at the beginning of Act 5, upon entering in his `magic robes` Prospero asks Ariel, “Now does my project gather to a head./ My charms crack not, my spirits obey; …How’s the day? ”. Prospero now has his hands on the levers of power and he is ready to pull them. Throughout `The Tempest` Prospero acts like a ruthless mage in order to complete his long awaited revenge against his enemies, whenever he does so he is dressed in the clothes of a magician.

However after Prospero decides to forgive his enemies of their wrong doings and give up his magic, Prospero orders Ariel, “Fetch me the hat and rapier in my cell” and he then declares, “ I will discase me, and myself present / As I was sometime in Milan”. Prospero has decided to take off his clothes of a magician and garb himself in clothes of a duke, like he used to dress himself in when he was the duke of Milan.

The clothes that a person wears represent the type of person they are, for example, a rich businessman would wear an expensive suit, but a poor beggar would wear rags. Prospero’s metamorphose from magical clothes to ducal clothes represents his transformation from a mage to a normal person, from his vengeance into virtue and from his fury into reason.

Another technique that Shakespeare has uses to convince the audience in `The Tempest` that Prospero has truly changed for the good, is bringing music into the play.

At the very point when Prospero renounces his magic he demands some heavenly music, “But this rough magic / I here abjure. And when I have required / Some heavenly music (which even now I do)…I’ll break my staff / Bury it certain fathoms in the earth, / And deeper than did ever plummet sound / I’ll drown my book”. Upon reaching the climax of the play, Prospero recites an emotional but powerful soliloquy, in which he speaks for seventeen lines in an powerful incantatory rhythm without using a verb and he remembers all the magic he has performed, during this speech he confesses that he has performed black magic, by addressing the spirits and by reviving the dead, “Graves at my command / Have waked their sleepers”, in Shakespearean times performing black magic was considered an evil act, so by admitting to reviving the dead it is the ultimate self-sacrifice. By admitting to this he is clearly showing remorse for the evil acts he has performed and that will surely convince the audience in Prospero’s change of heart.

The solemn music that Prospero requests generates a climatic atmosphere and an enchanting sense of magic which intensifies the turning point in Prospero’s life.

The second time there is music in the play, is when Ariel sings his joyful song of freedom while attiring Prospero. In contrast to the first time, this music is cheerful and merry rather than solemn and sombre like the preceding time.

Ariel’s song expresses his joy and jubilation as he anticipate his freedom from his many years he spent serving Prospero. His joy is illustrated in his song through the repetition of the word `merrily`, “…After summer merrily. / Merrily, merrily shall I live now…”.

The music is again used to intensify the spectator’s sense of having reached the climax and a turning point in the play, as Ariel sings a paean while donning Prospero, he anticipates his forthcoming liberty. In this paean Ariel sings about the Spring, “Under the blossom…” through this poem Shakespeare is using pathetic fallacy to convey Prospero’s mood to the audience.

Performance is another technique that Shakespeare uses to help the audience believe in Prospero’s sudden change of heart.

Shakespeare gives explicit guidance (using stagecraft) to the actor playing Prospero in Act V. After Prospero tells Ariel to fetch his captives the stage directions say, `Prospero marks a circle in the ground`, and shortly after the stage directions say, `They all enter the circle which Prospero has made and there stand charmed`. All Prospero’s captives are now standing charmed in the circle which he has created, and they are all under the influence of Prospero. This circle is a powerful sign of the strength of Prospero’s magic. Prospero is seen to give up his power gradually, struggling against his fury; thus it convinces the audience that Prospero’s abrupt change of heart is genuine – even though it is difficult for him.

Another example where the stage directions gives explicit guidance to the actors in Act V, is when Alonso enters the circle `with a frantic gesture`. Alonso enters the circle with a frantic gesture because he is inconsolable over the loss of his son, Ferdinand, (who he thinks has drowned when the tempest was conjured) and he is desperate to be with him. Another reason why the actor playing Alonso should perform a frantic gesture is because he is bewildered by the spell that Prospero has put upon him. As a result of his immense confusion and mournful sorrow, he is on the verge of committing suicide. Therefore, the audience feels extremely sympathetic towards Alonso. Since we feel sympathetic towards Alonso, surely Prospero must also feel sympathetic towards him and seeing him in a tragic mess like he was Prospero will almost definitely feel that been punished enough for the wicked crime which he committed and therefore forgive him. Thus, we see that Prospero’s metamorphosis is really genuine.

Another example of when Prospero shows sympathy in Act V through performance, is when all Prospero’s enemies are within the charmed circle, and both Gonzalo and Prospero are in tears; “ Holy Gonzalo, honourable man, / Mine eyes, ev’n sociable to the show of thine, / Fall fellowly drops”. The actors playing Prospero and Gonzalo should now both be crying. Gonzalo should be crying because he was being punished through no fault of his own and Prospero should be crying to show his compassion for Gonzalo. The spectacle of the two wise men weeping on stage would certainly be emotional for the audience, and that will convince them Prospero is undeniably capable of being moved (just like Ariel was) by means of human emotion.

An example of implicit guidance (on using stagecraft) given by Shakespeare, is when Prospero makes the speech renouncing his magic. Prospero declares, “…I’ll break my staff…”. When Prospero announces this, he should stretch out his staff in the direction of the audience. This acts as a visual symbol of Prospero’s renunciation of his magic.

The most influential tool that Shakespeare uses to help the readers believe in Prospero’s sudden change of heart is the language that he uses.

In the speech when Prospero was moved by Ariel and he decides to forgive his enemies rather then to take revenge, Shakespeare utilizes many different types of language.

Prospero asks Ariel a rhetorical question on the second line of this speech, “Hast thou, which art but air, a touch, a feeling / Of their afflictions”. The three nouns; `air`, touch`, `feeling`, suggest Ariel’s nimbleness and delicacy. He is just a spirit. Prospero on the other hand, is a real man of flesh and blood. If Ariel can show sympathy for Prospero’s incarcerated enemies, then surely Prospero can be compassionate towards them. The fact that Prospero is moved convinces us that his metamorphose is authentic.

Prospero uses antithesis twice in this speech, juxtaposing the contrasting ideas of `reason` and `fury`, `virtue` and `vengeance`. Throughout the play we have seen Prospero’s affectionate treatment of Miranda and occasionally of Ariel. We observe that Prospero is capable of kindness and love, and these lines bring to life our sense of implementation. We observe only extremes of cruelty in `fury` and `vengeance` and since we want Prospero to renounce that cruelty in order to rewrite happily the repentant Alonso with his handsome son Ferdinand and beautiful bride-to-be Miranda and they’ll be able to lead a new life together. The use of antithesis brings out the extremes of hatred and love, we have seen that Prospero is capable of the former hatred and cruelty; we hope and believe that Prospero will now adopt the latter course of action, love and forgiveness.

Whilst all Prospero’s captives are in the circle standing charmed, Prospero talks of an incoming tide, “…and the approaching tide / Will shortly fill the reasonable shore / That now lies foul and muddy”. The concluding act of `The Tempest` ushers in a complete transformation for the audience as Prospero abandons magic for manhood and revenge for forgiveness. The audience has the sensation of entering a new and better world. Prospero uses the simile of a new day, “as the morning steals upon the night, / Melting the darkness…” and the metaphor of a new tide to suggest that a new beginning is approaching. These images penetrate the mind of the audience and create a sense of newness which supports us in believing in Prospero’s sudden change of heart.

This essay has now analysed and explained some of the numerous ways in which Shakespeare assists the audience into believing in Prospero’s abrupt change of heart.