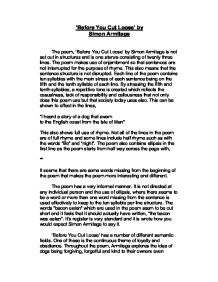 'Before You Cut Loose' by Simon Armitage.

'Before You Cut Loose' by Simon Armitage The poem, 'Before You Cut Loose' by Simon Armitage is not set out in structures and is one stanza consisting of twenty three lines. The poem makes use of enjambment so that sentences are not interrupted for the purpose of rhyme. This also means that the sentence structure is not disrupted. Each line of the poem contains ten syllables with the main stress of each sentence being on the fifth and the tenth syllable of each line. By stressing the fifth and tenth syllables, a repetitive tone is created which reflects the casualness, lack of responsibility and callousness that not only does this poem use but that society today uses also. This can be shown to effect in the lines, "I heard a story of a dog that swam to the English coast from the Isle of Man" This also shows full use of rhyme. Not all of the lines in the poem are of full rhyme and some lines include half rhyme such as with the words "life" and "night". The poem also contains ellipsis in the first line as the poem starts from half way across the page with, "" It seems that there are some words missing from the beginning of the poem that makes the poem more interesting and different. ...read more.

Guilt and abandoned responsibility are explained in the poem through connotations in the poem like the quote below: "No dog howls like a dog kicked out at night. Try looking a dog like that in the eye." These lines can have a big affect on how bad dog owners can be motivated into changing their behaviour towards their dog. Another clear semantic field in the poem is that that concerns the cruelty towards dogs. Cruelty is connected with the two above semantic fields, the loyalty that dogs show even they are exposed to violence and the guilt felt by the readers for treating the dogs in these ill-manner ways. This semantic field is also backed up by the use of a number of related verbs like, "kicked", "hurled" and "ditched". A phrase to outline the cruelty towards dogs in this poem is, "Kicked out at night" By leaving a dog out in the cold weather all night, this is seen as cruel and shows the cruelty that people show dogs. This semantic field fits in perfectly with the other two fields as we have the loyalty of the dogs which is destroyed by the violence of their owners which is cruel and makes the reader feel guilty due to their lack of responsibility. ...read more.

The expression 'cutting loose' is usually associated with letting go of something and in Armitage's poem, he could be referring to cutting loose of decency and morals. This is another example of a metaphor used in the poem. The title could also just mean the letting go of a dog's reign. Armitage's intentions in this poem are very obvious. Armitage intends to evoke guilt, provoke thought and evoke emotion. He evokes guilt in the poem concerning the cruelty that the dog's owners inflict on their dogs. Armitage explains that although the dogs are violently "kicked" and "hurled", they are still loyal and obedient to their owners. Armitage provokes thought in the poem through a number of different themes including loyalty, obedience and responsibility. He also evokes emotion by giving the reader reasons to sympathise with the dogs, feeling sad for them and also evoking the guilt that evokes emotion. Armitage's intentions are very evident throughout the poem and he uses these intentions to relate the poem to the lives of the readers. This poem affected me greatly as it made me think about how badly dogs can be treated and even though they are treated like this, they are still loyal and loveable to their owners. ...read more.