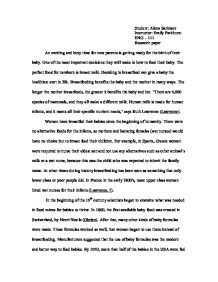 Student: Alena Sarkisov Instructor: Emily Parkhurst ENG - 111 Research paper An exciting and busy time for new parents is getting ready for the birth of their baby. One of the most important decisions they will make is how to feed their baby. The perfect food for newborn is breast milk. Deciding to breastfeed can give a baby the healthiest start in life. Breastfeeding benefits the baby and the mother in many ways. The longer the mother breastfeeds, the greater it benefits the baby and her. "There are 4,000 species of mammals, and they all make a different milk. Human milk is made for human infants, and it meets all their specific nutrient needs," says Ruth Lawrence (Lawrence). Women have breastfed their babies since the beginning of humanity. There were no alternative foods for the infants, so mothers and lactating females (wet nurses) would have no choice but to breast feed their children. For example, in Sparta, Greece women were required to nurse their eldest son and not use any alternatives such as other animal's milk or a wet nurse, because this was the child who was expected to inherit the family name. At other times during history breastfeeding has been seen as something that only lower class or poor people did. In France in the early 1800's, most upper class women hired wet nurses for their infants (Lawrence, 7). ...read more.

About 80 percent of the cells in breast milk are macrophages, cells that kill bacteria, fungi and viruses. Breast milk provides everything most babies need to build a healthy brain and grow properly for the first six months of life (Riordan, 111). Different studies have found that breastfeeding for six months or more makes it less likely that baby will go on to develop food or respiratory allergies (Riordan, 116). Scientists believe that the fatty acids and immune factors in breast milk prevent allergic reactions by stopping large foreign proteins from getting into a baby's system. A breastfed babies nurses until he or she is full, not until a certain number of ounces have been drunk. That may explain why breastfed babies are less likely to be obese than bottle-fed infants. Breast milk also contains less insulin than formula. Insulin stimulates the creation of fat (Shier, 925). Sucking at the breast promotes good jaw development as well. It's harder work to get milk out of a breast than a bottle, and the exercise strengthens the jaws and encourages the growth of straight, healthy teeth. The baby at the breast also can control the flow of milk by sucking and stopping. With a bottle, the baby must constantly suck or react to the pressure of the nipple placed in the mouth (BabyCenter). Breastfeeding also reduces a child's risk of developing insulin-dependent (type 1) diabetes (MotherFriendly.com). ...read more.

Studies have shown that breastfeeding a child reduces a woman's chance of developing breast cancer later. However, a few viruses can pass through breast milk. One of them is HIV, the virus that causes AIDS. Women who are HIV positive should not breastfeed. Other illnesses such as herpes and hepatitis infections can also be transmitted through breast milk. But that doesn't always mean a mother with those diseases shouldn't breast-feed (Lawrence, 476-484). If a mother has any health problems it is better to discuss with a doctor before breastfeeding. In conclusion, one of the hardest decisions that a new mother will have to make is how she would feed her newborn. I think it depends on the situation and lifestyle. Breastfeeding is definitely great. It's healthier for babies, less doctor visits and help to save family budget. But some women have a hard time doing it or are really uncomfortable with it. If the mother is a stay-at-home mom obviously it will be easier to breastfeed. But for a working mother it would be more difficult. Personally, I think breastfeeding is the best way to go. It is as nature intended and provides all the proper balance in nutrition. Women who nurse get their figures back faster and have lower chances of breast cancer. For the babies they have fewer illnesses and get a better jaw development. But the real reason to breastfeed is when the mother and the child will look into each others eyes while breastfeeding, mother realizes what love is. ...read more.