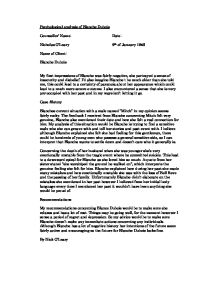 Psychological analysis of Blanche Dubois Counsellor' Name: Date: Nicholas O'Leary 9th of January 1948 Name of Client: Blanche Dubois My first impressions of Blanche was fairly negative, she portrayed a sense of insecurity and disbelief. I'd also imagine Blanche t be much older than she told me, this could lead to a certainty of paranoia about her appearance which could lead to a much more severe outcome. I also encountered a sense that she is very pre-occupied with her past and in my ways isn't letting it go. ...read more.

I believe although Blanche explained she felt she had feeling for this gentleman, there could be hundreds of young men who possess a general sensitive side, so I can interpret that Blanche wants to settle down and doesn't care who it generally is. Concerning the death of her husband when she was younger she's very emotionally unstable from the tragic event where he committed suicide. This lead to a downward spiral for Blanche as she loved him so much. ...read more.

Recommendations My recommendations concerning Blance Dubois would be to make sure she relaxes and has a lot of rest. Things may be going well, for the moment however I sense a period of regret and depression. So my advice would be to make sure Blanche doesn't make any immediate actions concerning any individuals. Although Blanche has a lot of negative history her intentions of the future seem fairly active and encouraging so the future for Blanche Dubois looks fine. By Nick O'Leary ...read more.