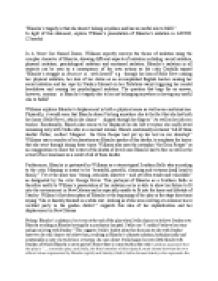 Blanches tragedy is that she doesnt belong anywhere and has no useful role to fulfil. In light of this statement, explore Williams presentation of Blanches isolation in ASCND. (25marks)

Transfer-Encoding: chunked ﻿?Blanche?s tragedy is that she doesn?t belong anywhere and has no useful role to fulfil.? In light of this statement, explore William?s presentation of Blanche?s isolation in ASCND. (25marks) In A Street Car Named Desire, Williams expertly conveys the theme of isolation using the complex character of Blanche, showing different aspects of isolation including: social isolation, physical isolation, psychological isolation and emotional isolation. Blanche?s isolation in all respects can be seen as a consequence of her own actions as the critic Cardullo argued ?Blanche?s struggle in Streetcar is?with herself? e.g.: through her loss of Belle Reve causing her physical isolation, her loss of her status as an accomplished English teacher causing her social isolation and her rape by Stanley (blamed on her flirtatious ways) triggering her mental breakdown and causing her psychological isolation. The question that begs for an answer, however, remains: is Blanche?s tragedy due to her not belonging anywhere or having any useful role to fulfill? ...read more.

Furthermore, Blanche is portrayed by Williams as a stereotypical Southern Belle who according to the critic Manning is meant to be ?beautiful, graceful, charming and virtuous [and] loyal to family.? Yet at the same time ?strong, articulate, assertive ? and yet often tender and vulnerable? as designated by the critic George Hovis. This portrayal of Blanche as a Southern Belle is therefore useful to William?s presentation of her isolation as he is able to show her failure to fit into the environment in New Orleans and is especially unable to fit into the home and lifestyle of Stanley. William?s first description of Blanche at the beginning of the play in the stage directions saying ?She is daintily dressed in a white suit...looking as if she were arriving at a summer tea or cocktail party in the garden district.? supports this idea of her sophistication and her displacement in New Orleans. ...read more.

Blanche speaks of her loss of Allan saying ?I loved someone, too, and the person I loved I lost.? This may be a foreshadowing of the events that lay ahead for Blanche causing her to loss those she loved yet again, causing the reader to question as to whether this was simple Blanche?s fate, t loss all of those she loved. Blanche is also deserted by Mitch her lover later on in the play and her last chance of redemption and hope. Blanche thanks Mitch for his kindness in the play adding that ?[She] need[s] kindness now.? The use of the word ?need? suggests that she also needs Mitch, therefore making it all the more horrible when she loss him and finds herself once again isolated. Overall, Williams explores different forms of isolation through Blanche?s character; emotional isolation, physical isolation as well as romantic isolation. Williams is therefore able to effectively create sympathy for Blanche, by portraying her as vulnerable and abandoned by all the people that she loved and cared for. ...read more.