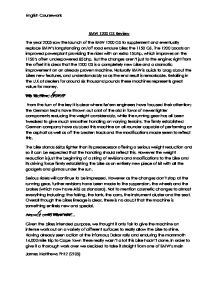 BMW 1200 GS Review The year 2005 saw the launch of the BMW 1200 GS to supplement and eventually replace BMW's longstanding on/off road endure bike; the 1150 GS. The 1200 boasts an improved powerplant providing the rider with an extra 15bhp, which improves on the 1150's often underpowered 85bhp. But the changes aren't just to the engine; right from the offset it is clear that the 1200 GS is a completely new bike and a dramatic improvement on an already proven machine. Naturally BMW is quick to brag about the bikes new features, and understandably so as the end result is remarkable. Retailing in the U.K at dealers for around six thousand pounds these machines represents great value for money. The Technical Stuff. From the turn of the key it is clear where Be'em engineers have focused their attention; the German techs have thrown out a lot of the old in favor of newer lighter components reducing the weight considerably, while the running gear has all been tweaked to give much smoother handling on varying terrains. The firmly established German company have dubbed this machine an all rounder capable of performing on the asphalt as well as off the beaten track and the modifications made seem to reflect this. The bike stands 66Ibs lighter than its predecessor offering a serious weight reduction and so it can be expected that the handling should reflect this. ...read more.

The low end power was quite remarkable for such a big bike as the torque appeared endless as it made mince meat of the first obstacle. As the race continued I saw countless 'lesser' machines fail on either the steep slopes or the pot holed tracks but the Be'em seemed in its element. Then came the river, which I had admitted to the team earlier I had been apprehensive about. Rather cautiously (compared to the fearless Austrian riders at least) I began crossing the river. And still the bike kept pulling and never lost grip. I was starting to see the bikes true off road potential by now my machine and I were enjoying every minute of the experience. Truthfully the end of the trial came all too soon, however really the trial had been about testing out the machines off road capabilities, and with that foot note it was hard to feel bad that it was over as the bike from Be'em had performed just as if not better than expected. Suffice to say by now my machine and I were enjoying every minute of the experience "Several 100 meters in came the races first trial, a particularly steep hill of loose wet mud begging to be churned up by the 100 or so machines belting toward it." RiDE Rating: 9/10 Commentary: The article was designed as a magazine article for a mainstream bike magazine such as RiDE and so the language and techniques used were included to give the piece a hint of authenticity. ...read more.

"By now my machine and I were enjoying every minute of the experience. When referring to the trial in Austria I used lexis like "ploughed" and "churned" to re iterate the harsh terrain and the bikes offroading prowess. In order to get a suitable feel for automotive journalism and the manner in which the articles are composed I researched a lot of magazines for articles similar to that of the one I was going to write and read through 'The Long Way Down' which used the bike the R1200 GS over along period. This was effectively a 14,000 mile road test. This combined with reading a lot of articles in the prominent bike magazine RiDE provided me with the right amount of background knowledge to successfully write this piece. When redrafting I kept trying to adapt the language used to more technical appropriate terms to better reflect the manner in which automotive articles are written. After further research I tried to adapt the structure of the piece by including quotes in bold and breaking the piece down into two primary components; the technical aspect and the 'ride' experience. This featured two different styles, a more formal specific style in the technical section and a more casual humorous style in writing the 'riding' section. Map showing the planned hypothetical route from Napoli in Southern Italy up through Rome and Venezia to reach Osternich in Austria and to then head North West through Germany and then Belgium to cross the channel at Calais. ?? ?? ?? ?? English Coursework James Matthews Ph12 (2105) ...read more.