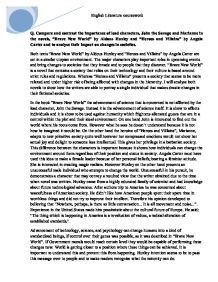 Q. Compare and contrast the importance of lead characters, John the Savage and Marianne in the novels, “Brave New World” by Aldous Huxley and “Heroes and Villains” by Angela Carter and to analyse their impact on changes in societies.

Both texts “Brave New World” by Aldous Huxley and “Heroes and Villains” by Angela Carter are set in a similar utopian environment. The major characters play important roles in upcoming events and bring changes to societies that they invade and to people that they discover. “Brave New World” is a novel that contains a society that relies on their technology and their culture is based around strict rules and regulations. Whereas “Heroes and Villains” presents a society that seems to be more relaxed and under higher risk of being affected with changes in the hierarchy. I will analyse both novels to show how the writers are able to portray a single individual that makes drastic changes in their fictional societies.

In the book “Brave New World” the advancement of science that is concerned is not affected by the lead character, John the Savage. Instead it is the advancement of science itself. It is show to affects individuals and it is show to be used against humanity which frightens alienated guests that are in a control within the plot and their ideal environment. On one hand John is interested to find out the world where his roots come from. However what he sees he doesn’t understand because it is not how he imagined it would be. On the other hand the heroine of “Heroes and Villains”, Marianne, adapts to new primitive society quite well however her compressed emotions would not show her actual joy and delight to someone less intellectual. This gives her privilege in a barbarian society. This difference between the characters is important because it shows how individuals can change the environment around them regardless of their position and status in society. Angela Carter must have used this idea to make a female leader because of her personal beliefs; bearing a feminist attitude. She is interested in creating magic realism. However Huxley on the other hand presents an unsuccessful male individual who attempts to change the world. Unsuccessful in his pursuit, he demonstrates a character that may convey a resulted view that the writer obtained due to the time when novel was written. Huxley came from a highly educated family of scientist and had knowledge about future technological advances. After authors trip to America he was concerned about wastefulness of American society. He didn’t like how American people spent their spare time in worthless things and did not try to improve their intellect. Therefore his opinion developed to believing that "Nowhere, perhaps, is there so little conversation... It is all movement and noise...”. Experience in the United States made him pessimistic about the cultural future of Europe. He said: "The thing which is happening in America is a revaluation of values, a radical alteration of established standards."

Advancement of technology, science, and psychology can change humans into a kind of standardized beings, if control over their genes was possible, as it was described in “Brave New World”. If Government morals would reach certain level they would be capable of performing these changes now. World is getting closer to a position where these things can be achieved. It is important to understand this and prevent this from happening. Huxley intention seems to be to pass this message over to people and to make readers recognise what the minority can do.

Also people might have had small hope for a happy future at the time of this crisis of upcoming war, so attitude must have been quite cynical. This is effectively presented in the novel by Huxley which is also not long before the government notices exotic infection of individualism which causes John the Savage to elimination imperfection from society. This seems to be the only option for controllers which insures civilisation continues to existence.

After Bernard Marx discovers John, he uses him to improve his reputation in his society because he is so desperate to be popular and to fit with others. Because John is a loner in the reservation he is very excited about escaping. However John is very idealistic character that becomes a loner in both societies that lives in his own Shakespeare’s tale based world. 'O brave new world!' It was a challenge, a command”, this quote originally fromMiranda's speech in Shakespeare's “The Tempest”, Act V, Scene I. John’s understanding of everything is quite old fashioned but his character is sympathetic for the readers, because it must be quite hard for our society to change believes and adapt to rules like “Every one belongs to every one else”.

The heroine in “Heroes and Villains” presented to the reader from her childhood when her characteristics started to develop. After series of unfortunate events in Marianne’s life her life seems to make no sense to her and she seeks for adventures and excitement. Marianne’s father comments to Marianne’s attitude that her escape from boring professor society may lead to danger, “opposite of boredom is chaos”. This is ironic because this quote predicts future events. But Marianne is a very brave and strong character. She is not afraid. Series of incidents like being bit by a snake or even being raped by an individual whose life she saved on many occasions doesn’t bring her to tears. Her bizarre morals and unique mind-set wouldn’t let her act in a normal way, because she wouldn’t be special any longer.

In Huxley’s dystopia world, everyone in Brave new world use the drug that helps to keep people from experiencing stress and all other negative emotions. Also this is the way to prevent all the conflicts. Pain, stress, grief, humiliation and disappointment are very unique emotions but it does come up occasionally due to technological flaws that are caused by an accident. Lenina is another character that got isolated and withdrawn from her original society and moved unintentionally to the reservation. She soon experienced all the differences and difficulties in new environment. She had no access to the drug that she was dependent on. "A gramme is better than a damn."  Her immune system weakened and her organism was affected. She gained weight, plus abuse of alcohol probably affected her brain as well as other organs too.

The books title, “Heroes and Villains”, portrays the role of labelled characters in creating the social perception of difference and conditioning children to hate the other. It comes from the name of the game that Professors' children play. The Co plays imaginative character roles of heroic Soldiers who always win over evil Barbarians. It is ironic, that Marianne refuses to play the game, but also questions the rules of the game by denying permanent victory of professor’s soldiers as well as rejecting the idea of good and bad, when she says that she does not know "which is which any more, nor who is who". While in brave new world there are five strict social classes with special characteristics created for specific reasons to perform different types of work as well as specific intelligence level and suitable colouring cloths to be easily identifiable by others.  Children are conditioned to like what they are and to hate to be someone else from the other class using Pavlov’s technique of classical conditioning. Techniques like using electric shock to make children dislike roses that represent nature the powerful farce of imagination and ideas as well as book the source of knowledge, which must be limited for performance of specific semi skilled job.