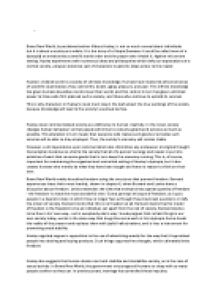 Brave New World, by acclaimed author Aldous Huxley, is not so much a novel about individuals but it is about a society as a whole

﻿? Brave New World, by acclaimed author Aldous Huxley, is not so much a novel about individuals but it is about a society as a whole. It is the story of a Utopia (however it could be called more of a dystopia) an emotionless scientific world order and the people who inhabit it. Against this severe setting, Huxley experiments with numerous ideas and philosophies which defy our expectations of a normal society, using an extensive cast of characters to gets his ideas across to the reader. Huxley's civilized world is a society of ultimate knowledge. Humans have mastered almost all areas of scientific examination; they control life, death, aging, pleasure, and pain. This infinite knowledge has given humans boundless control over their world, and this control in turn has given unlimited power to those who first planned such a society, and those who continue to uphold its survival. ...read more.

Brave New World mainly describes freedom using the structures that prevent freedom. Bernard experiences these limits most harshly, shown in chapter 6, when Bernard and Lenina have a discussion about freedom. Lenina maintains the view that everyone has a great quantity of freedom - the freedom ?to have the most wonderful time.? Soma portrays this type of freedom, as it puts people in a hypnotic state in which they no longer feel as though they should ask questions or defy the orders of society. Bernard insists that this is no freedom at all. Bernard claims that his model of freedom is the freedom to be an individual, set apart from the rest of society. Bernard desires to be free in his ?own way...not in everybody else's way.? Huxley argues that certain things in our own society today, works in the same way that drugs like soma work in this dystopia. ...read more.

Complete freedom to have pleasure has made each person like that of an infant, incapable of adult thought and creativity. For instance, Bernard wishes to have more control over his desires, but the sight of such control frightens others who have been educated to be free with their impulses. The society in Brave New World can only survive because it has abolished any leftovers of human relationships and connections. The relationships of father and mother no longer exist because all human beings are born in a scientific lab. The relationship between husband and wife is no longer essential because society rejects marriage, and all men and women learn to portion each other equally.The price of such actions is that humans never can truly experience the emotions of love. However, Both John and Lenina begin to feel these deep emotions during the progression of the novel, but they cannot act on these emotions in a practical way because neither can understand how to have such a relationship in their society and upbringing. Possible conclusion? ...read more.