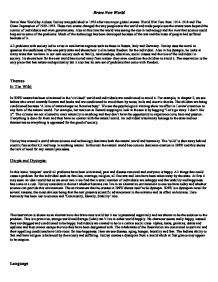 Brave New World Brave New World by Aldous Huxley was published in 1932 after two major global events- World War Two from 1914-1918 and The Great Depression of 1929-1933. These two events changed the way people saw the world and made people see the events were beyond the control of individuals and even governments. Also at this time the world was seeing the rise in technology and the view that science could help solve some of the problems. Much of the technology has been developed because of the war and the mass of people had suffered because of it. All problems with society led to a rise in totalitarian regimes such as those in Russia, Italy and Germany. Huxley uses the novel to question the usefulness of the one party state and shows how it eliminates freedom for the individual. Also in his dystopia, he looks at many areas that we have in our own society such as family, relationships, education, social classes and the role of the individual in society. He shows how far the new world has moved away from nature- they even condition the children to avoid it. The reservation is the only place that has nature and spirituality but it also has its own set of problems that come with freedom. ...read more.

Blade Runner This film composed by Ridley Scott is based on the Phillip K.Dick novel "Do Androids Dream of Electric Sheep?" which was composed in 1969. BR the Director's Cut was released in 1992 and is a cult version of the original. The pessimistic view of the future world can be explained with the dramatic changes that the world was exposed to during the 80's. It is set in Los Angeles in 2019. This is not that far away but the world created by Scott is very different from the one we live today. BR depicts a world devastated by technology, population explosions, pollution and consumerism. The natural world is non-existent and the wealthy can buy it or flee. Male dominated business rules the world and people struggle to survive. The world in the 80's reflected many of these ideas. Global warming and deforestation were key issues and the gap between the rich and poor increased rapidly, which was helped by the growth of multi-national corporations that promote consumerism on a global scale. Also technology began to invade people's lives, as it had never done before. Ridley Scott's vision is an extension of this world. Themes In The Wild: The natural world in Blade Runner has been replaced by technology and the world seems to have consumed beyond its means. ...read more.

The natural world in BR has been replaced by technology and the world seems to have consumed beyond its means. In Los Angeles in 2019, there is overcrowding, decay, pollution and an environment where nothing natural exists. . People have replaced the natural world with man-made creations such as the Tyrell building and the huge apartment blocks that house the people. With nothing natural, the people in BR also seem to be isolated and focussed on their own lives. J.F. Sebastian is brilliant but alone; Deckard is alone as is Tyrell who is symbolically a 'God' and is the most powerful man in the film. Even people on the street seem hurried and alienated, struggling to survive. Their attitude to nature is non-existent because for most people the natural world doesn't exist anymore. Some individuals, like replicants, carry memories but nothing real seems to exist. People relationship with and attitudes to nature is complex in both BNW and BR. In the BNW individuals who live in the city are conditioned to hate nature and this is life long. Those that live on the Reservation struggle to survive and nature is a complex and difficult part of their lives. The setting in BR has eliminated the natural world and consumed all of its resources. The people have little or no nature to relate to and these determine their attitude. ...read more.