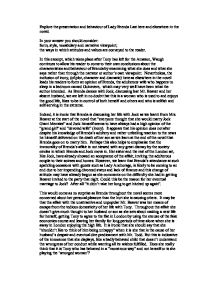 Brenda in 'A Handful of Dust'. In this excerpt, which takes place after Tony has left for the Amazon, Waugh continues to allow his reader to come to their own conclusions about the characteristics and behaviour of Brenda by examining what she does and wh

Explore the presentation and behaviour of Lady Brenda Last here and elsewhere in the novel. In your answer you should consider: form, style, vocabulary and narrative viewpoint; the ways in which attitudes and values are conveyed to the reader. In this excerpt, which takes place after Tony has left for the Amazon, Waugh continues to allow his reader to come to their own conclusions about the characteristics and behaviour of Brenda by examining what she does and what she says rather than through the narrator or author's own viewpoint. Nevertheless, the inclusion of irony, (of plot, character and dramatic) here as elsewhere in the novel leads his readers to form an opinion of Brenda, the adulterous wife who happens to sleep in a bedroom named Guinevere, which may very well have been what the author intended. As Brenda dances with Jock, discussing her Mr. Beaver and her absent husband, we are left in no doubt that this is a woman who is used to and enjoys the good life, likes to be in control of both herself and others and who is selfish and self-serving in the extreme. Indeed, it is ironic that Brenda is discussing her life with Jock as we learnt from Mrs. ...read more.

It is ironic that she should say that she "shouldn't like to think of him being unhappy" when it is she that is the cause of her husband's despair and eventual dire predicament with Mr. Todd. But this is indicative of the innocence that she displays, like a badly behaved child that doesn't understand the wrongness of her conduct while wanting all its wishes fulfilled. Does she really think that it is Tony who has behaved in a "monstrous way" and not herself or is she playing the 'wronged woman'? In this scene as in the rest of the novel it is Brenda who is in control and leading the affair. It is she who invites Beaver to take her out and who initially refuses his attentions in the taxi and then spurs him into action later. She continually "feed(s) him a bit of high-life every week or so" as she is under no misapprehension that her attraction for Beaver is the social prominence he gains by his association with Lady Beaver who belongs to the world of parties and balls. Despite her awareness of his shortcomings and unresponsiveness (his failure to get in touch after the party and thoughtless letter after Brenda's generous gift of a ring) ...read more.

She does not seem over affected by the tragedy, the repetition of "poor little boy" showing a relative poverty of emotion in contrast to the genuine grief of Tony. She rejects Tony's efforts to console her and makes no effort to comfort him and then chooses this time to return to her party set before revealing her affair cruelly in a letter to her bereaved husband. She appears more genuinely upset later in the novel during a visit to Tony's solicitor having been abandoned by Beaver and now in dire financial straits, she weeps when she learns that she is to receive no legacy, the estate having been left to Tony's relatives. Some might say a just reward for her actions. However the final irony of the novel is that Brenda is not really punished despite being the guilty party. Her loneliness after Beaver and her smart friends desert her is only temporary as she appears at the end as the wife of Jock, the attractive and well-liked member of parliament. This is in glaring contrast to the disastrous fate of the innocent Tony. It appears that the "parties" are not "all over" for Lady Brenda and the reader is left to ponder the injustice of an errant wife unpunished and a cuckolded husband suffering. Or is Waugh just reminding us, as he himself knew, that "such is life"! ?? ?? ?? ?? ...read more.