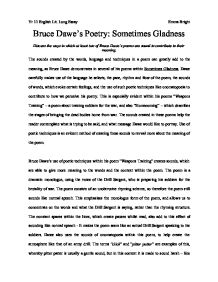 Bruce Dawe's Poetry: Sometimes Gladness - Discuss the ways in which at least two of Bruce Dawe's poems use sound to contribute to their meaning.

Yr 11 English Lit. Long Essay Emma Bright Bruce Dawe's Poetry: Sometimes Gladness Discuss the ways in which at least two of Bruce Dawe's poems use sound to contribute to their meaning. The sounds created by the words, language and techniques in a poem can greatly add to the meaning, as Bruce Dawe demonstrates in several of his poems within Sometimes Gladness. Dawe carefully makes use of the language he selects, the pace, rhythm and flow of the poem, the sounds of words, which evoke certain feelings, and the use of such poetic techniques like onomatopoeia to contribute to how we perceive his poetry. This is especially evident within his poems "Weapons Training" - a poem about training soldiers for the war, and also "Homecoming" - which describes the stages of bringing the dead bodies home from war. The sounds created in these poems help the reader contemplate what is trying to be said, and what message Dawe would like to portray. Use of poetic techniques is an evident method of creating these sounds to reveal more about the meaning of the poem. Bruce Dawe's use of poetic techniques within his poem "Weapons Training" creates sounds, which are able to give more meaning to the words and the context within the poem. ...read more.

These sounds create that feeling of masculinity, and contribute to the 'manliness' wished portrayed in the poem. The poem is after all about a bunch of men soldiers being prepared for war, the poem therefore must have that constant sounding of masculine words otherwise it would not be as effective. The same principle is used with the colloquial term "copped the bloody lot" which is used by the Sargent. It contributes in illustrating the fact that these are masculine, Australian blokes, by using this brash Australian term. This use of 'voice' within the poem is almost acting as a parody of the Drill Sargent, but still hints at his fear they will most probably die. Sounds are also consistently used within Bruce Dawe's "Homecoming" to contribute to the significance of the poem. Poetic techniques are used once again to illustrate these sounds, and therefore allow the reader more insight into the poem. "Homecoming" is about the stages of bringing home the dead bodies of the Australia soldiers, from the Vietnam War. One of the main elements of sound in this poem, is that of the use of rhythm in the first verse, which is achieved by the use of short phrases and the constant pauses, for example All day (pause) ...read more.

Dawe also makes use of the sounds of repetition, leaving the repeated words 'dead dead dead' echoing in your mind and without any emotion attached to them, which is what the Sargent is trying to say throughout the poem, that their emotions must not get in the way. Another poem, which effectively displays Dawe's use of sound to contribute towards the meaning of the poem, is "Homecoming". A strong sense of rhythm is used within the first verse by the sounds of the short phrases and constant pauses, which make the poem seem chant-like and methodical, like the process of the handlers dealing with the dead bodies of the soldiers. "Homecoming" also demonstrates a use of the repetition of sound, where it repeats the words 'they're' which identifies the impersonal relationship between these handlers and the bodies. Dawe's chosen language within the poem helps to suggest the sorrowful, mournful feeling and meaning of the poem, for example 'emptiness, howl, fading, tremble'. These poems by Bruce Dawe are able to effectively demonstrate how he is able to reveal more about the meaning of a poem to us, through simply the sounds he is able to create through his chosen words and language. ...read more.