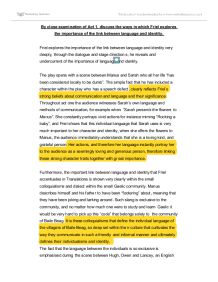 By close examination of Act 1, discuss the ways in which Friel explores the importance of the link between language and identity.

By close examination of Act 1, discuss the ways in which Friel explores the importance of the link between language and identity. Friel explores the importance of the link between language and identity very deeply, through the dialogue and stage directions, he reveals and undercurrent of the importance of language and identity. The play opens with a scene between Manus and Sarah who all her life "has been considered locally to be dumb". The simple fact that he has included a character within the play who has a speech defect, clearly reflects Friel's strong beliefs about communication and language and their significance. Throughout act one the audience witnesses Sarah's own language and methods of communication, for example when "Sarah presents the flowers to Manus". She constantly portrays vivid actions for instance miming "Rocking a baby", and Friel shows that this individual language that Sarah uses is very much important to her character and identity, when she offers the flowers to Manus, the audience immediately understands that she is a loving kind, and grateful person. ...read more.

This point is further accentuated when Lancey addresses the Gaelic villagers "as if he were addressing children - a shade too loudly and enunciating excessively." In using Lancey's language to patronise the other Gaelic characters, Friel shows how important language his in concerning identity and how others might perceive one's identity. Friel investigates the link between language and identity further by creating the character of Jimmy Jack Cassie, a man of many languages. He is able to speak Gaelic, Greek and Latin fluently, it seems ironic that a small Hedge school that might be perceived to be lacking in resources, is home to so much intelligence. Jimmy is consistently drifting between languages, "...alla hekelos estai en Atreido domois...". This almost subconscious and eloquent use of so many rich and difficult languages suggests the idea that Jimmy is an incredibly clever man. However his constant use of these different languages could also be interpreted differently in concerning the identity of Jimmy. It is arguable that constant quoting of "Homer" could be interpreted that Jimmy wishes to inflict his languages and therefore his intelligence on the rest of the characters in a manner that constantly boasts his knowledge to the others. ...read more.

Such an exclamation suggests that she may not be as loyal to her language as her acquaintances, the way she refers to them as "you people" rather than "us people" suggests that the Gaelic community is perhaps not a community she particularly favours to be a part of. Such language reflects not only that Maire may not have such a strong sense of loyalty to her community, but other's reactions to her language and word choice, such as Manus' suggests that the majority of the Gaelic characters consider language to be a great reflection of the sense of loyalty one feels for their community. In exploring the link between language and identity, Friel does not simply study the word choices of the characters in order to reveal their identities; he explores the language of their communication, their local colloquialisms and dialect, the languages they choose to converse in and the way they use language and tone to address one another. Not only does he study how language affects the identities of individuals, but he also examines the way in which it affects and shapes the relationships between the characters and the overall identity of the Gaelic community. ...read more.

This essay is relevant throughout and attempts to address aspects of the question in different, clearly identified ways. It would also be useful to consider language and identity in terms of naming and place, as well as develop the importance of the two languages in conflict. More examples from the text would help to develop closer textual analysis.