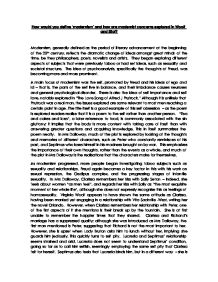 By comparing Mrs Dalloway and the poetry of TS Eliot, define modernism.

How would you define 'modernism' and how are modernist concerns explored in Woolf and Eliot? Modernism, generally defined as the period of literary advancement at the beginning of the 20th century, reflects the dramatic change of ideas amongst great minds of the time, be they philosophers, poets, novelists and artists. They began exploring different aspects of subjects that were previously taboo or had set ideas, such as sexuality and societal structure. The idea of psychoanalysis, specifically the thoughts of Freud, was becoming more and more prominent. A main focus of modernism was the self, promoted by Freud and his ideas of ego and id - that is, the parts of the self live in balance, and their imbalance causes neuroses and general psychological disorder. There is also the idea of self importance and self love, notably explored in "The Love Song of Alfred J Prufrock." Although it is unlikely that Prufrock was a real man, the issues explored are some relevant to most men reaching a certain point in age. The title itself is a good example of this self obsession - as the poem is explored readers realise that it is a poem to the self rather than another person. "Tea and cakes and ices", a later reference to food, is commonly associated with the sin gluttony; it implies that the body is more content with taking care of itself than with answering greater questions and acquiring knowledge. ...read more.

In "Portrait of a lady", the woman described seems to try and keep the man with her by employing different tactics, including guilt (which Septimus also feels). The man feels a self pity for himself for being trapped in his relationship. Prufrock, by contrast, feels pity for himself because he feels he will not fulfil his duties in a relationship, due to his ageing and differing appearance and attitudes. Religion is another theme commonly explored by modernist writers such as Woolf and Eliot. Eliot makes many biblical references in "The Love Song of Alfred J Prufrock" - firstly the universe is rolled "toward some overwhelming question" mimicking the stone being rolled from the entrance of Jesus' tomb, and Prufrock says he is "Lazarus, come from the dead". Prufrock, in this way, thinks of himself as a form of messiah; he is on a par with and possibly more important than religion. Eliot also makes reference to "Christ the tiger" in "Gerontiom", a forceful metaphor for the imposing nature of religion. In Mrs. Dalloway, Septimus thinks of universal "rules" such as "men should not cut down trees"; he appears to think of himself too as a messiah. Considering his suicide later in the novel, Septimus' appearance as a form of prophet seems foreboding and a damning insight against religion on Woolf's part. ...read more.

He contrasts great philosophical questions with trivial matters such as "tea and cakes and ices"; for all his pomp, he is afraid of how society will judge him, something trivial compared to such great questions. This appears to splinter what he is originally thinking - when he tries to bring order to his grander thoughts, the trivial party preys on his mind. "Tea and cakes and ices" is a reference to food, which is commonly associated with the sin gluttony; it implies that the body is more content with taking care of itself than with answering greater questions and acquiring knowledge. There are also the repeated lines such as "in the room the women come and go, talking of Michelangelo"; these seem much like a chorus and attempt to bring structure to the free poem. This is contrasted against his hyphenated, and therefore fragmented, lines. Modernism was a drastic movement in ideals and thoughts among those living in the early 20th century. It began exploring previously taboo subjects and utilising ways of writing that until then had never been publicised, such as the "stream of consciousness" style. Although many modernists disagreed with each other over the issues they covered, they were still united by their exploration of their new world. They faced a world where religion was fading, where sexuality was becoming more prominent, and their exploration of it was what brought them ultimately into the same movement. ...read more.