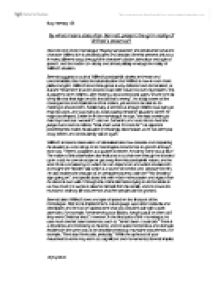 By what means does Alan Bennett present the grim reality of Wilfreds existence?

By what means does Alan Bennett present the grim reality of Wilfred’s existence?

Near the end of the monologue “Playing Sandwiches” the predicament that the character Wilfred is in is decidedly grim and desolate. Bennett presents this to us in many different ways, through the character’s diction, behaviour and style of speech, and the reader can clearly and almost pitifully envisage the reality of Wilfred’s situation.

Bennett suggests to us that Wilfred’s paedophilic desires are innate and uncontrollable; this makes the bleak situation that Wilfred is now in even more pitiful and grim. Wilfred’s tone throughout is very defeated and demoralized, as if all the “treatment” that the doctors could offer could not cure his problem. This is apparent when Wilfred, after hearing a local school bell, states, “it’s the one bit of my life that feels right and it’s that bit that’s wrong”. He is fully aware of the consequences and implications of his actions, yet seems to be able to do nothing to thwart them. Additionally, it seemed as though Wilfred was trying to resist his urges, and was trying to avoid putting himself in situations where he might be tempted. Earlier on in the monologue he says, “she kept wanting to hold my hand but I wouldn’t”. Later on, Samantha, in court, tries to hold the judges hand and he reflects, “Well, that’s what I’m here for.” His apparent powerlessness makes his situation increasingly disconsolate, as he has been put away before, and undoubtedly will be again.

Wilfred’s incessant observation of detail illustrates how desolate and despairing his situation is, as he clings on to meaningless occurrences to get him through each day. “There’s a playtime at a quarter to eleven. And they come out at four.” The nature of this observation also indicates to us that even though he is locked up in a cell, he cannot escape or get away from his paedophilic nature, and he soon finds a consistency on which he can depend on and which enables him to imagine the “kiddies” still, which is a source of comfort and pleasure for him. He also ravishes the thought of an aeroplane journey, with the ““No Smoking” sign going on”, and speaks about this with much more passion and vigour than he does his own wife. Through this, I think Bennett is trying to demonstrate to us how much he wants to distance himself from his old life, and he craves the mundane, ordinary life occurrences that free people take for granted.

Bennett alters Wilfred’s tone and style of speech in the final part of the monologue. Prior to his imprisonment, his language was rather colourful and descriptive, and he had an upbeat tone that you wouldn’t pair with a park attendant. For example, “ornamenting your kiddies, hanging stuff on them as if they were Christmas trees”. However, in the final parts of the monologue, he uses much shorter, blunt sentences, such as, “Janet’s been. Usual tack.” There is a dreariness and monotony to his tone, and he states momentous and dramatic incidents in the same way as he describes everyday, mundane occurrences. For example, “Next stop Newcastle, probably.” While the upheaval of your household to some may seem as a significant and monumental, Bennett implies that Wilfred has been so vanquished and defeated by the whole saga that he has now become careless and indifferent to any future plans or ideas.

Wilfred’s changed outlook and optimism is also noted in his particular diction. For example, prior to his imprisonment Wilfred quite playfully yet sinisterly referred to children as “kiddies”. He would welcome their presence, and become frivolous and child-like in it. However, now he refers to them solely as “kids” and starts to echo much more serious and conceited adults who would “foist them off”. For example, “Only kids would come. They’d know”. The thought of their presence now scares Wilfred, as he knows that his temptations will remain long after he has been released.

Wilfred’s depression and pessimism is also indicated through his internal musings and dreams. It would be thought that in somewhere as bleak and lifeless as a prison, one would conjure up glistening and elating ideas of what they’re going to do when they’re released, as away to pass time and as source of optimism. However, Wilfred’s plan to find “a shed in the middle of a moor” and “fence it around with railway sleepers” and “be a recluse” is extremely depressing and demoralizing, and indicates to us just how beaten he has been by the whole incident and its consequences. There is a semantic field throughout the end of the monologue of defeat, and Wilfred is described as “hopeless” and “untouchable”, and it seems as though he just wants to detach himself completely from temptation and society upon his release.

Bennett carefully selects words and ideas that have a semantic field of grimness and desolateness, which conjures up an emotive and vivid image of Wilfred’s current welfare. For example, Bennett uses a dismal humour when “a packet of cornflakes” is thrown at Wilfred’s head. Bennett could not have chosen a much blander or uninteresting piece of confectionary than some Cornflakes, and the fact that such a harmless item is used as a weapon of attack from some disquieted housewife makes Wilfred’s situation even more humiliating and pitiful, and the reader cannot help but to feel a twang of sympathy for the man that has been reduced and degraded so much. Bennett uses a similar technique in the “piss in your porridge” scenario. Although the reader has to suppress a laugh, the thought of such an already unpleasant item being contaminated with urine is physically repulsive, and although the thought is quite humorous, the reality behind it is exceptionally abysmal and grim.