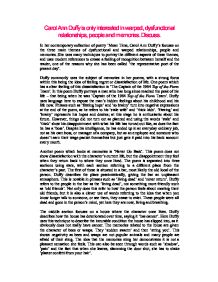 Carol Ann Duffy is only interested in warped, dysfunctional relationships, people and memories. Discuss. In her contemporary collection of poetry 'Mean Time, Carol Ann Duffy's focuses on the three main themes of dysfunctional and warped relationships, people and memories. She uses many techniques to portray the different aspects of these themes, and uses modern references to crease a feeling of recognition between herself and the reader, one of the reasons why she has been called 'the representative poet of the present day'. Duffy commonly uses the subject of memories in her poems, with a strong focus within this being the idea of feeling regret or dissatisfaction of life. One poem which has a clear feeling of this dissatisfaction is 'The Captain of the 1964 Top of the Form Team'. In this poem Duffy portrays a man who has long since reached the peak of his life - that being when he was 'Captain of the 1964 Top of the Form Team'. Duffy uses language here to expose the man's hidden feelings about his childhood and his life now. Phrases such as 'fizzing hope' and 'so brainy' turn into negative expressions at the end of the poem, as he refers to his 'stale wife' and 'thick kids'. ...read more.

The memories related to the house are given the character of bees or wasps. They 'sudden swarm' and then 'string you'. This shows negativity as bees and wasps are not popular animals and many people are afraid of their sting. The idea that the memories sting her demonstrates it is not a pleasant sensation she feels. This can also be seen through words such as 'shadow', 'pain' and the fact that when she leaves, slamming the door shut, she has to shake 'plaster confetti from your hair'. Lastly, we see the character on the journey home. Here the focus is on the negative side too, referring the how the places she once knew 'have changed their name by neon'. Even the weather is downbeat, demonstrated by the 'cold sweat' on the glass. Duffy demonstrates how the town has changed from a quite place into a town full of commercialised things. This is shown through the 'neon' names which can give out the impression of some sleazy town, especially with the reference to a 'drenched whore'. Duffy also uses irony here, through the term 'red light'. The reader is left unsure whether this is referring to a red light on the traffic lights, as the car stops, or red light in reference to a prostitute. ...read more.

Similarly to 'Mean Time', it is about the breakdown of a relationship. The title, 'Disgrace', refers to divorce but the difference here is that the character does not long for the past. The character describes herself as 'unpenitent' which shows her lack of regret, she is not sorry. The relationship was once dysfunctional; they 'had not been home in our hearts for months'. This intentional pun on the phrase 'home is where the heart is' demonstrates how the relationship had been over for ages, and 'how our words changed' refers to the fact they no longer spoke romantically to each other but in 'obscenities'. Death is a strong theme throughout the poems. In 'Never Go Back; there are references to the 'living dead', 'bereaved' and 'hearse' and Duffy describes the driver as looking like 'death'. Even the house has 'cancer', and she says it is 'nursing' itself. 'Havisham' uses words relating to death to portray the characters anger. She wishes her ex 'dead', 'stabbed' at a wedding cake, and asks for a male 'corpse'. The idea of death is extremely strong in 'Disgrace' as there are constant references to it. The words 'nursing' and 'corpse' are mentioned again, and Duffy even describes the humming noise made by a nearly expired light bulb as 'small deaths'. Even the kitchen is 'sullen' and the apples are 'rotten to the core'. ...read more.