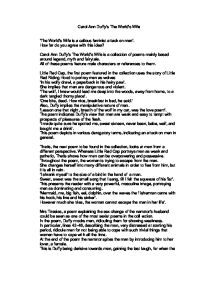 Carol Ann Duffy's The World's Wife 'The World's Wife is a callous feminist attack on men'. How far do you agree with this idea? Carol Ann Duffy's The World's Wife is a collection of poems mainly based around legend, myth and fairytale. All of these poems feature male characters or references to them. Little Red Cap, the first poem featured in the collection uses the story of Little Red Riding Hood to portray men as wolves 'In his wolfy drawl, a paperback in his hairy paw'. She implies that men are dangerous and violent. 'The wolf, I knew would lead me deep into the woods, away from home, to a dark tangled thorny place'. 'One bite, dead. How nice, breakfast in bed, he said.' Also, Duffy implies the manipulative nature of men. ...read more.

This presents the reader with a very powerful, masculine image, portraying men as dominating and consuming. 'Mermaid, me, big fish, eel, dolphin, over the waves the fisherman came with his hook, his line and his sinker'. However much she tries, the woman cannot escape the man in her life'. Mrs Tiresias, a poem explaining the sex change of the narrator's husband could be seen as one of the most sexist poems in the collection. In the poem, Duffy mocks men, ridiculing them for showing weakness. In particular, lines 43-46, describing the man, very distressed at starting his period, ridicule men for not being able to cope with such trivial things that women have to cope with all the time. At the end of the poem the narrator spites the man by introducing him to her lover, a female. ...read more.

flew faster than the speed of sounds around the globe, lunched; walked on the moon, golfed, hole in one; lit a fat Havana on the sun'. I can agree that feminism is a strong theme in The World's Wife; however, there are exceptions to this. Anne Hathaway is not ridiculing men in anyway it is merely celebrating love. The poem is made up of the reflections of Anne Hathaway (William Shakespeare's wife) about their life together. She reminisces about the way he touched and spoke to her: 'A verb, dancing in the centre of a noun' and how she still remembers their romance and passion. I conclude that, although The World's Wife could be viewed as quite sexist, a closer examination of the content of the collection, for example the inclusion of Anne Hathaway contradicts the statement that the collection is a 'callous feminist attack on men'. Isobel Manley ...read more.