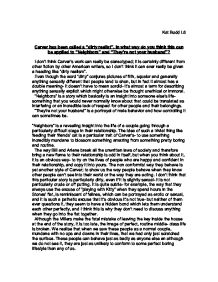 Kat Budd L6 Carver has been called a "dirty realist". In what way do you think this can be applied to "Neighbors" and "They're not your husband"? I don't think Carver's work can really be stereotyped; it is certainly different from other fiction by other American writers, so I don't think it can ever really be given a heading like "dirty realism". Even though the word "dirty" conjures pictures of filth, squalor and generally anything sexually different that people tend to shun, but in fact it almost has a double meaning- it doesn't have to mean sordid- it's almost a term for describing anything sexually explicit which might otherwise be thought unethical or immoral. "Neighbors" is a story which basically is an insight into someone else's life- something that you would never normally know about that could be translated as interfering or an incredible lack of respect for other people and their belongings. "They're not your husband" is a portrayal of male behavior and how controlling it can sometimes be. "Neighbors" is a revealing insight into the life of a couple going through a particularly difficult stage in their relationship. ...read more.

These people can behave just as badly as anyone else an although we do not see it, they are just as unlikely to conform to some perfect boring lifestyle than any of us. "They're not your husband" is a frank description of how male behavior can lead to extremes when men are put under great pressure. This can often happen in relationships when the female is more successful than the male, yet is unlikely to happen in circumstances where the man is the breadwinner and a wife or partner is left at home to look after children and the house. This statement is proved when Earl's failure to get himself a job leads to his controlling behavior over his wife in a want of something to live for, a purpose in life. Earl enjoys having some influence over her life and the way he can make decisions for her- after all, he doesn't really have any to make for himself. It gives him something to think about- ways to get her to lose more weight quickly, to make her an object of desire that he can be proud to be seen with. ...read more.

In both stories Carver uses "dirty realism" to give the audience an insight into the lives of real people- things that could actually happen and don't revolve around some huge unrealistic drama like a lot of fiction does. However it is a lot more obvious in "They're not your husband" than it is in "Neighbors", simply because the language is that much more raw and unrefined. It is subtler in "Neighbors", yet it is still there, and if anything, I find the subtlety more effective than the obvious, harsh language in "They're not your husband". In both stories the language is simple and unpolished, leaving the mind of the reader open to discover the seedy and immoral world he has based his characters in. It opens your eyes to see the world around us in the same way, which is slightly daunting and depressing, but probably a good thing in the long run as it lets us look at other people and realise how pointless their lives are. I think Carver has been classed as a "dirty realist" simply for the reasons that he uses sex as to act as a part in the life of human beings which can be changed by something which doesn't have to be very dramatic, making it realistic. WC 1176 ...read more.