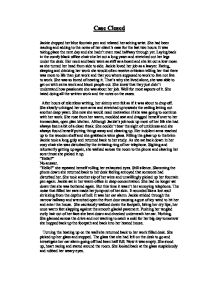 Case Closed. Im going mad she muttered to herself. Jackie tried to dismiss that somebody had drank from her glass but she couldnt stop thinking about the fact

Case Closed Jackie dropped her blue fountain pen and relaxed her aching wrist. She had been reading and adding to the notes of her client's case for the last two hours. It was taking place the next day and she hadn't even read halfway through yet. Laying back in the comfy black office chair she let out a long yawn and stretched out her legs under the desk. Her neck and back were as stiff as a board and she let out a low moan as she turned her head from side to side. Jackie loved her job as a lawyer. Eating, sleeping and drinking her work she would often receive criticism telling her that there was more to life than just work and that you where supposed to work to live not live to work. She was so bored of hearing it. That's why she lived alone, she was able to get on with extra work and block people out. She knew that they just didn't understand how passionate she was about her job. Well for most aspects of it. ...read more.

She cautiously walked down the footpath, biting her dry lips, her once warm feet slapping against the smooth glacial pavement. Pushing her tangled curly hair out of her face she bent down and checked underneath her car. Nothing. She glanced across the drive and not wanting to catch a cold for her big day tomorrow she hopped back up the footpath and back into her heated house. Turning the heating up on the wall she returned back to her work filled desk. She picked up her glass and stopped. The glass that she had left on the desk to go and investigate her car alarm going off had been half full. Now it was empty. She stood up, heart racing and stared around the room. She looked back at the glass suspiciously and rubbed her weary eyes. "I'm going mad" she muttered to herself. Jackie tried to dismiss that somebody had drank from her glass but she couldn't stop thinking about the fact she was sure she hadn't drank it all. She glided over to the front door and pulled across the top lock. ...read more.

His grip loosened on her hair and she stumbled across the room falling against her desk. Hitting the floor again Jackie began to crawl towards the door in hope to get away from the attacker. She lunged for the handle and tried to turn it. It didn't move. She remembered she had locked it minutes before. Frantically trying to unlock it she could hear him breathing behind her. The lock clicked open but it was too late. She felt another piercing blow to her head, then darkness. Jackie woke up with a start. The pain in her head was unbearable. She was trying to catch her breath but she couldn't, her lungs felt as if they were about to explode. She attempted to sit up, but hit her head on what seemed like a wooden surface that was inches in front of her face. She was terrified; she needed to know where she was. She hated not being in control of situations. She tried to move her arms. They were pressed tightly to her sides. She was in some sort of box. She let out a long, high pitched scream. Little did she know that there was no chance any living person would ever hear her. ...read more.