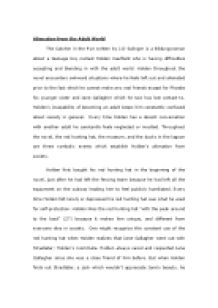 Catcher in the Rye Essay. The three main symbolic events which describe Holden's alienation from society are the red hunting hat, the museum and the ducks in the lagoon.

﻿Alienation from the Adult World The Catcher in the Rye written by J.D Salinger is a Bildungsroman about a teenage boy named Holden Caulfield who is having difficulties accepting and blending in with the adult world. Holden throughout the novel encounters awkward situations where he feels left out and alienated prior to the fact which he cannot make any real friends except for Phoebe his younger sister and Jane Gallagher which he now has lost contact to. Holden's incapability of becoming an adult keeps him constantly confused about society in general. Every time Holden has a decent conversation with another adult he constantly feels neglected or insulted. Throughout the novel, the red hunting hat, the museum, and the ducks in the lagoon are three symbolic events which establish Holden's alienation from society. ...read more.

Holden then seeking for a friend goes to see Ackley. Ackley then again, disappoints Holden because Ackley had not given him the attention and moral support he really needed. This leads again for Holden to put "his red hunting hat on" and turn "the peak around to the back" the way he liked it (52). The museum is a place Holden always enjoyed going to since childhood. "The best thing, though, in that museum was that everything stayed right where it was. Nobody'd move... Nobody'd be different. The only thing that would be different would be you" (121). Holden goes to the museum two times in the novel. The first time he walks all the way through central park but does not enter the museum. When Holden arrives he is too afraid to enter because something might have changed in the museum. ...read more.

The ducks and the lagoon are both symbols of Holden's alienation. Holden questions why and where the ducks disappear the same why he questions why people change and alienate Holden. The lagoon symbolizes Holden's ideal world where everything is "frozen" and simple and how the ducks (society) abandon Holden. Holden then "walked all around the whole damn lake" but doesn't see a single duck (154). This leads for Holden again to feel depressed and alone. The three main symbolic events which describe Holden's alienation from society are the red hunting hat, the museum and the ducks in the lagoon. Holden is a misunderstood teenage boy who is confused about society and their way of living. Holden is stuck between two lifestyles, either becoming a child or an adult. Holden tries being either one but he constantly fails at this and it results for him feeling alienated and lonely. ...read more.