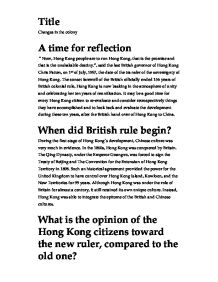 Changes in the colony

Title Changes in the colony A time for reflection " Now, Hong Kong people are to run Hong Kong, that is the promise and that is the unshakable destiny.", said the last British governor of Hong Kong Chris Patten, on 1st of July, 1997, the date of the transfer of the sovereignty of Hong Kong. The sunset farewell of the British officially ended 156 years of British colonial rule, Hong Kong is now basking in the atmosphere of unity and celebrating her ten years of reunification. It may be a good time for every Hong Kong citizen to re-evaluate and consider retrospectively things they have accomplished and to look back and evaluate the development during these ten years, after the British hand over of Hong Kong to China. When did British rule begin? During the first stage of Hong Kong's development, Chinese culture was very much in evidence. In the 1860s, Hong Kong was conquered by Britain. The Qing Dynasty, under the Emperor Guangxu, was forced to sign the Treaty of Beijing and The Convention for the Extension of Hong Kong Territory in 1898. Such an historical agreement provided the power for the United Kingdom to have control over Hong Kong Island, Kowloon, and the New Territories for 99 years. Although Hong Kong was under the rule of Britain for almost a century, it still retained its own unique culture. ...read more.

Many were against the handover, due to the lack of nationalism and the unforeseeable threats. Past? What's life been like in the past ten years? Like riding the most thrilling roller coaster. According to "One country, two systems", Hong Kong has a separation of legal and judiciary system which enables Hong Kong to use the British common law rather than the china's civil law. The purpose of this policy is to increase the confidence of the Hong Kong citizens and reassure that Hong Kong will not suffer a massive change under the rule of China. However, the economy of Hong Kong underwent severe depression and is now recovering. The Hang Seng Index (the indicator of the overall market performance in Hong Kong economy) has fluctuated drastically during these ten years. Hong Kong economy entered its depression stage after twenty years of strong boom, in the month after the British left, July 1997. The Asian financial typhoon swept through most of the Hong Kong citizens and they were struck because of the failure of their high risk investments in the stock market. The bull market suddenly lost its confidence and the Hong Kong financial market fell from the peak to the abyss. Many could not handle the failure of their investments and chose to escape from reality by committing suicide. ...read more.

Ten years after the transfer of the sovereignty, Hong Kong citizens are still denied the right to vote for their own Chief Executive. Instead, an 800-member election committee chooses the leader for 7,000,000 people. The path of democracy is difficult to walk through, still and many citizens and democratic legislators are fighting for it. (A little box underneath for extra information) What is the view of the British? The report to Parliament by the Secretary of State for Foreign and Commonwealth Affairs, released in February 2007, stated this: "At the end of this reporting period we conclude that the 'One Country, Two Systems' principle has generally worked well in practice and that the rights and freedoms promised to Hong Kong in the Joint Declaration and the Basic Law continue to be upheld." Future? Optimistic. "Hong Kong has had no serious difficulty in riding out the periodic storms that followed. The point here, one that my British business colleagues quickly appreciated, is that the Hong Kong measures were taken with the full cooperation of the Chinese government but not at its dictation.", commented Sir Robin McLaren. Ten years of ups and downs, the Pearl of the East began to shine again. Everything in the past seemed to be shrouded in the mist and raindrops. Hong Kong citizens are still able to stand still and overcome their obstacles and enjoy the picturesque scene of a rainbow after the storm. ...read more.