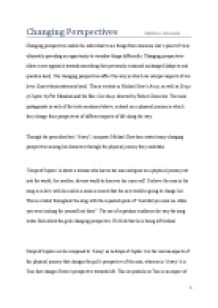 Changing Perspectives in Michael Gows Away, as well as Drops of Jupiter by Pat Monahan and the film Cast Away directed by Robert Zemeckis.

﻿Changing Perspectives Matthew Liberante ________________ Changing perspectives enable the individual to see things from someone else?s point of view, ultimately providing an opportunity to visualise things differently. Changing perspectives allow a new approach towards something that previously remained unchanged [adapt to suit question here]. Our changing perspectives affect the way in which we interpret aspects of our lives. [Insert thesis statement here]. This is evident in Michael Gow?s Away, as well as Drops of Jupiter by Pat Monahan and the film Cast Away directed by Robert Zemeckis. The main protagonists in each of the texts mentioned above, embark on a physical journey in which they change their perspectives of different aspects of life along the way. Through the prescribed text ?Away?, composer Michael Gow has created many changing perspectives among his characters through the physical journey they undertake. ?Drops of Jupiter? is about a woman who leaves her man and goes on a physical journey out into the world, the carefree, diverse world to discover her inner self. ...read more.

The composer uses rhetorical questions to ask the woman, did she ‘fall for a shooting star, one without a permanent scar’. Not only does Monahan use rhyme, be he also uses symbolism. The man is asking the woman if she fell for a shooting star, which is symbolic of another man. This then raises questions with the audience; do we desire a shooting star? Do we want to change aspects of our world to make it even better than it already is? “Cast Away” directed by Robert Zemeckis explores the physical and inner aspects of change as Chuck Noland (Tom Hanks), a FedEx executive encounters a physical journey to a small, unforgiving, uninhabited island. As on his way by plane to another FedEx destination leaving his fiancé at home, the plane unexpectedly gets caught in a lighting storm resulting in the crashing of the plane leaving Chuck a sole survivor. The scene in which this part of the movie is filmed includes various filmic techniques. ...read more.

This is can be compared to the start of Chuck?s 4 year Journey on the deserted island he feels he has no hope. A camera shot taken through Chuck?s eyes establishes this as the camera pans slowly around in a circle at eye level showing nothing but the open sea. Chuck must transform himself physically and emotionally to survive the challenges set on the deserted island. By putting his fears aside and with persistence, Chuck finds the courage to set out to sea after 1500 nights in an effort to escape the tropical wasteland. Once Chuck returns home to civilisation, we can notice that his perspectives of life have changed dramatically as he now values his life a lot more. Changing perspectives can have powerful impacts on an individual. This is being demonstrated through the above texts. We have seen the effects of change on the song writer in drops of Jupiter; we have also seen chuck?s changing perspectives towards life in ?Cast Away?. This is relevant to ?Away? as it is the physical journeys in all three texts that make each of the characters change their perspectives. ...read more.