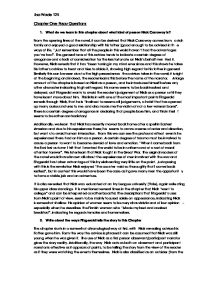 1. What do we learn in this chapter about what kind of person Nick Carraway is? From the opening lines of the novel, it can be derived that Nick Carraway comes from a rich family and enjoyed a good relationship with his father (good enough to be advised in the ways of life. "Just remember that all the people in this world haven't had the advantages you've had". The general tone of this advice tends to indicate a certain degree of arrogance and a lack of consideration for the less fortunate on Nick's behalf merited it. However, Nick reveals that it has "been turning in my mind ever since and this shows he takes his father's advice to heart and tries to abide it, showing high regard for his father in general. Similarly this can be seen due to the high precedence the advice takes in the novel; it is right at the beginning and indeed, the reader learns this before the name of the narrator. A large amount of the chapter is based on Nick as a person, and he introduces himself before any other character indicating high self regard. His name seems to be backtracked and delayed; as if Fitzgerald wants to avoid the reader's judgement of Nick as a person until they have learnt more about him. This links in with one of the most important points Fitzgerald reveals through Nick, that he is "Inclined to reserve all judgements, a habit that has opened up many curious natures to me and also made me the victim of not a few veteran bores". ...read more.

Additionally, dialogue is used to fit in with the party atmosphere and blend in extra information. Another classic literary technique used by the author is with holding of information, and example of which is shown with Nicks reaction to a rumour he was engaged, when put forward by Daisy. "The fact that had published the banns was one of the reasons I had come east". The tantalising piece of information gains curiosity and pushes the reader's instinct to read on to try to find out the whole story behind Nick's migration. This "craving for knowledge" is also used at the end of the chapter, where Gatsby is seen for the first time, reaching out towards the green light over the water. This symbolises a longing, and the use of this technique at the end of the chapter makes the reader want to read on. This image of looking at a light is also a large foreshadow of Gatsby's fate. A light in the darkness is commonly perceived as the transition between life and death or earth and heaven. This is indicating to the deep reader that Gatsby will move into the light later in the book and effectively die. 3. The characters that Nick introduces us to in this chapter are "unrelentingly unpleasant". Argue this statement. It is important to remember when reading this chapter that Fitzgerald chose to write as Nick after all the events had happened, so everything has been written with hindsight. ...read more.

It also shows the changes in the importance of manners and morals in the 1920s. No one objects to how Jordan acts. Jordan does not participate much in the early dialogue in the chapter, and only intercedes once with "Absolutely!" indicating that this is the only issues raised that interests her. She seems quite ignorant throughout the chapter due to the lack of interaction. She doesn't move off the divan to greet Nick or even acknowledge his presence. It is my opinion, that Tom is the most unpleasant of the three characters introduced after Nick. The traits that Daisy and Jordan both display in this chapter can be at least partially accredited to the social atmosphere they live in and are residing in. Tom's violence and negligent treatment can only paint him out as a bad person. It is possible to claim that all the negative connotations surrounding the characters can be due to Fitzgerald writing as Nick with the use of hindsight and the influence of current opinions after the events. All of the characters come across as unpleasant in some features of their descriptions, but equally these faults can be interpreted as vulnerabilities or elements of self preservation. I do not think that Daisy and Jordan come across as unpleasant here; merely vain and self absorbed. Fitzgerald's portrayal of Tom however, does make him come across as a genuinely unpleasant man. ?? ?? ?? ?? Lisa Wade 12B Chapter One Essay Questions ...read more.