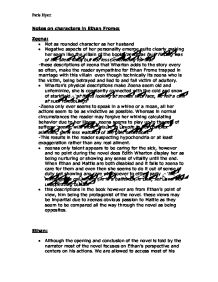 Notes on characters in Ethan Frome: Zeena: * Not as rounded character as her husband * Negative aspects of her personality emerge quite clearly making her seem like the villain of the book.-'zenobias fault finding was of the silent kind, but not less penetrating for that' -these descriptions of zeena that Wharton adds to the story every so often, make the reader sympathize for Ethan Frome trapped in marriage with this villain even though technically its zeena who is the victim, being betrayed and lied to and fall victim of adultery. * Wharton's physical descriptions make Zeena seem old and unfeminine, she is constantly connected with the cold and snow of starkfield.- 'at times looking at zeenas shut face, he felt a chill at such forebodings' -Zeena only ever seems to speak in a whine or a moan, all her actions seem to be as vindictive as possible. Whereas in normal circumstances the reader may forgive her whining calculating behavior due to her illness, zeena seems to play up to the role ...read more.

sympathies for Ethan, mainly as he is the main character but also as even though he is committing this adultery and betrayal of his wife we understand his motivation due to the descriptions of both women. * The two themes in Ethan Frome seem to be the conflict between passion (Ethan's love for Mattie) and social convention (Ethan's duty to his wife) , and the harsh personal affect of the winter climate of starkfield . both themes conspire to make up Ethan- weighed down by his unfortunate circumstance of his bitter existence of a poor farmer trapped in Starkfields frozen landscape even though he could have made something better of himself.-'most of the smart ones get away' * His entire life seems to be a victim of circumstance- his dreams of leaving Starkfield and becoming an engineer, his passion for Mattie, all crushed by his parents illnesses and zeenas illnesses, and of course the smash up.-'he looks like he's dead and in hell now' -throughout the book he is punished for attempting to ...read more.

and cheeks' * In the end of the novel Matties real self is revealed as her adolesance shines through for the first time not through innocence but through recklessness 'right into the big elm, you said you could so t' we'd never have to leave each other anymore.' This is the one moment in the novel where we can see her personality, ready to give in to the foolish thoughts without thinking. However even though she is being reckless, putting the protagonist 'hero' of the story into danger the reader can forgive her, for being young an innocent and because she is described so definitely all the way through the book as being Zeenas stark opposite. * Although the reader is rooting for mattie and Ethan the last chapter shows how young and flighty mattie really is. Is any of this actually worth it to Ethan? Showing mattie in the slightly absent minded light makes the reader questions Ethan's actions. agree they about being with mattie forever or escaping Zeena forever. Paris Hyett ...read more.