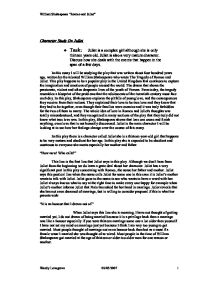 Character Study On Juliet * Task: Juliet is a complex girl although she is only thirteen years old. Juliet is also a very mature character. Discuss how she deals with the events that happen in the span of a few days. In this essay I will be studying the play that was written about four hundred years ago, written by the talented William Shakespeare who wrote The Tragedy of Romeo and Juliet. This play happens to be a popular play in the United Kingdom that continues to capture the imagination and emotions of people around the world. The drama that shows the passionate, violent and often desperate lives of the youth of Verona. Even today, the tragedy resembles a blueprint of the problems that the adolescents of the twentieth century must face each day. In this play, Shakespeare explores the pitfalls of young love, and the consequences they receive from their actions. They explained their love to be true love and they knew that they had to be together, even though their families were enemies and it was truly forbidden for the two of them to marry. The whole idea of love in Romeo and Juliet's thoughts was totally misunderstood, and they recognized in many sections of the play that they truly did not know what true love was. In this play, Shakespeare shows that love can cause and finish anything, even love that is not honestly discovered. Juliet is the main character I will be looking at to see how her feelings change over the course of this essay. In this play there is a character called Juliet she is a thirteen-year-old girl that happens to be very mature and obedient for her age. In this play she is expected to be obedient and courteous to everyone she meets especially her mother and father. "How now! Who calls?" This line is the first line that Juliet says in this play. ...read more.

Also the nurse will happen miss Juliet because she is like the child the nurse lost when she was pregnant. Juliet was worried because of the nurse she had been waiting 3 hours when she was promised 2 hours she is worried in case Romeos men would have killed her or even she might have got court her self at this time in the play. When the nurse comes back Juliet asks the nurse what is the news am I getting married and when. The nurse does tease her so she can get the last few moments alone with Juliet because when Juliet has gone the nurse will go because the nurse will have no job left. Juliet is also like the nurses daughter because the nurse lost her baby when she was young with the plague so the nurse breast-fed Juliet and looked after her like her own. That she can, but finally when the nurse can see that Juliet cant take it any more the nurse tells Juliet what Romeo said to her. "There stays a husband to make you a wife." The nurse says if you have the will to go to confection then you will be married then to Romeo your lover. This is one of the really happy scenes because Juliet is thinking I got my Romeo nothing can go wrong now because Juliet forgot about Paris the one her father and mother this Juliet going to marry. There are no arrangements for Paris just yet only for Romeo if there was some one who didn't know the plot to Romeo and Juliet they would think that Juliet would now runaway with Romeo. Those that know the story would know that she cant because she is still a little girl who needs the wisdom off her mother and father at this age like most teenagers. In the part act 3 scene 2 it is parallel to act 2 scene 5 Juliet wants some more information off the nurse but ...read more.

In the last seen we see Juliet Act 5 Scene 3 where Romeo dies because he thinks Juliet is dead so she kills her self when Juliet finds out. Juliet's final diction was quite easy for her to take her life Shakespeare made no hesitations to kill Juliet after Romeo had killed himself with poison "Let me die" Friar Laurence offers Juliet a place as a nun because every one else thinks that she is dead so he would look after Juliet because Romeo is dead, but Juliet is stare on NO I want to die with my Romeo. Juliet always wanted to kill her self ever since Romeo was banished to leave Verona or die in the end she did because of him and her love for him at the time. Juliet wanted to die since she found out that the entire plan was going wrong she always had death as a possibility but only considers it right at the end of the play when Romeo is dead. In this play Juliet has carton qualities that make her Juliet some of there are that she can be patient for a 13 year old and he know what to say she's very mature for her age. Even at the most dramatic time of this play Shakespeare made this character fight though till the end to keep her going. Juliet also acts this play as if it is just a game that she had bought. Even though this one of the first plays that Shakespeare made it is one of the best tragedies though out this world. They way he made the character Juliet act the way she dose when Juliet is under pressure. William Shakespeare's plays were not normally made for reading but for watching up on a stage being acted out. The reasons for this was that most people couldn't read so they had the chance to watch it and hear up on the stage in fount of them as a form of entertainment. William Shakespeare "Romeo and Juliet" Wendy Lovegrove 02/05/2007 1 ...read more.