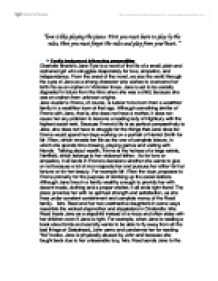 Charlotte Bronte's Jane Eyre - &quot;love is like playing the piano. First you must learn to play by therules, then you must forget the rules and play from your heart. &quot;

"love is like playing the piano. First you must learn to play by the rules, then you must forget the rules and play from your heart. " Family background influencing personalities Charlotte Bronte's Jane Eyre is a novel of the life of a small, plain and orphaned girl who struggles desperately for love, simpatico, and independence. From the onset of the novel, we see the world through the eyes of Jane as a strong character who wishes to overcome her birth rite as an orphan in Victorian times. Jane is set to be socially degraded in future from the time when she was a child, because she was an orphan from unknown origins. Jane Austen's Emma, of course, is luckier to be born from a wealthier family in a wealthier town at that age. Although something similar of Emma with Jane, that is, she does not have a mother, it does not cause her any problem to become a leading lady of Highbury with the highest social rank. Because Emma's life is so perfect comparatively to Jane, she does not have to struggle for the things that Jane does for. Emma would spend her days working on a portrait of Harriet Smith for Mr. Elton, which reveals her life as the one of complete leisure, in which she spends time drawing, playing games and visiting with friends. Talking about wealth, Emma is the heiress of a large estate, Hartfield, which belongs to her widowed father. As for love or simpatico, it all lands in Emma's decisions whether she wants to give or not because a lot of men respects her and pursues her either for her fortune or for her beauty. For example Mr. Elton the vicar, proposes to Emma primarily for the purpose of climbing up the social ladders. Although Jane lives in a family wealthy enough to provide her with decent meals, clothing and a proper shelter, it all ends right there! ...read more.

On the other hand, Jane Austen's Emma seems more of a typical Victorian style. Beautiful ladies and gowns, wealthy land-owners and evening balls and parties where people of higher classes in society all gather together. In Jane Eyre, Charlotte Bronte seems to be going very much against the traditions of the Victorian society, as Jane strives to overcome her fragility. Charlotte tries to criticize sex prejudice through Jane, that she has trouble settling into society not just because of her passion or family background, but also because of her gender. During the industrial revolution at that time, many new jobs in factories and households were offered to the lower-class women, but it did not do any good for women like Jane at this economic level. They had only one option for respectable employment that is to become a governess. Women either need to be like Emma, belong to the higher-classes, or the lower-class servants. Otherwise women like Jane always had an uncertain social status because employing one was a sign of culture and means in a Victorian home and therefore she was from the social level of the family, but the fact that she was paid a salary(usually very low) put her again at the economic level of the servants. Therefore her presence was usually isolated because she was somewhere between the servants and family members. Although a woman could maintain a decent living with the job, a governess will have to remain a governess all her life if she did not marry and had no relatives to care for her. Well usually it's hard to get a governess married to someone because men always wanted a wealthy woman with large fortunes, except if this governess is amazingly beautiful! That's why the criticism of the social positions of women is very obvious in Jane Eyre. Jane is not the least amazingly beautiful, she's a governess, yet she is still chosen by the man far above her social position. ...read more.

He therefore praises Emma for having absorbed the qualities of elegant manners of her governess Miss Taylor. Emma does not realize the intentions behind his words and has no idea about his romantic relationship with Jane Fairfax. Emma's behavior is way too different from Jane. She's arrogant and vain at first, while Jane has always been humble and wise. That's why as a mature man of reason, Mr. Knightly is not blind to the imperfections in Emma though he thinks her beautiful. He wants Emma to rise above elegant "manners", to become thoughtful and modest and somehow his concerns for her seems to suggest a romantic feeling he has for her and he, therefore desires to see her has a perfect young lady who is able to balance her heart with her head. After going through all the faults and wrongs, analyzing and reviewing, Emma realizes Knightly 's superiority over Frank. Because she was so concerned about the love affairs of others, she did not have time to discover her own feelings for Mr. Knightly, that she almost missed out on a perfect marriage. Then she almost ruined Harriet's chances of marrying Martin. Her romantic fancy towards Frank also almost destroyed the love between Jane and Frank. Emma finally, in a mature way, solved all her problems which will not be discussed in details here. Emma has learned to control her emotions, perceive matters in a different view and most importantly, accepting the idea of her own marriage and submitting some of her own independence. The same way, with the love of Mr. Rochester and the years of experience, Jane Eyre has transformed into a Cinderella after the ball, because when she returns to Gateshead in order to visit the Reeds, whom I already mentioned resemble the wicked step mother and step sisters, have already lost their power to make her life miserable! Jane and Emma's newfound ability to love wholly themselves and others is the essence of their maturation towards morality and the essence of their womanhood, as they both ends up happily marrying the man they truly loved with their heart! ...read more.