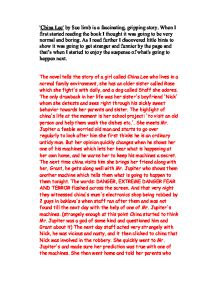 'China Lee' by Sue limb is a fascinating, gripping story.

'China Lee' by Sue limb is a fascinating, gripping story. When I first started reading the book I thought it was going to be very normal and boring. As I read further I discovered little hints to show it was going to get stranger and funnier by the page and that's when I started to enjoy the suspense of what's going to happen next. The novel tells the story of a girl called China Lee who lives in a normal family environment, she has an older sister called Rose which she fight's with daily, and a dog called Staff she adores. The only drawback in her life was her sister's boyfriend 'Nick' whom she detests and sees right through his sickly sweet behavior towards her parents and sister. The highlight of china's life at the moment is her school project: 'to visit an old person and help them wash the dishes etc.'. ...read more.

The next day staff acted very strangely with Nick, he was vicious and nasty, and it then clicked to china that Nick was involved in the robbery. She quickly went to Mr. Jupiter's and made sure her prediction was true with one of the machines. She then went home and told her parents who told her sister whom none of them believed her, Rose then told her the truth about Nick's life, (his real parents abandoned him and his foster parents abandoned him) but this does not change China's opinion of him. The next day Nick hears about Mr. Jupiter's machines and robs the place. He then tries some of the machines with his robber partner, Div, when the electricity cuts out (because of Mr. Jupiter's beard gets stuck in his toaster) just in time before Div presses the earth destruct button which would have really destructed the earth. ...read more.

Jupiter, as he is a worrier and gets angry over bad things in the world, he is very clever as well and his inventions are a work of art and imagination. The way he looks makes him even more queer as he is thin and has a long white beard which is very dirty and he expresses himself with it like when he is angry he ties it into knots. He is also very wise but confused which is humorous as he mixes up his words and the sayings he knows. I can imagine meeting someone like that and telling them about this story and seeing the reaction that would be funny!! I thought that this book was extremely enjoyable to read, I loved it and could never put it down, the suspense was enormous, and I recommend it to everyone as it is suitable for all ages. I found it funny touching and exciting and would like to read some more stories for this writer. It was a charming and unusual book I am sure I will read many times. ...read more.