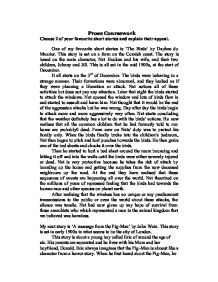 Choose 2 of your favourite short stories and explain their appeal.

Prose Coursework Choose 2 of your favourite short stories and explain their appeal. One of my favourite short stories is 'The Birds' by Daphne du Maurier. This story is set on a farm on the Cornish coast. The story is based on the main character, Nat Hocken and his wife, and their two children, Johnny and Jill. This is all set in the mid 1900s, at the start of December. It all starts on the 3rd of December. The birds were behaving in a strange manner. Their formations were abnormal, and they looked as if they were planning a liberation or attack. Nat notices all of these activities but does not pay any attention. Later that night the birds started to attack the windows. Nat opened the window and lots of birds flew in and started to assault and harm him. Nat thought that it would be the end of the aggression attacks but he was wrong. Day after day the birds begin to attack more and more aggressively very often. ...read more.

After realising that the wireless has no unique or any predicament transmissions to the public or even the world about these attacks, the silence was tensile. Nat had now given up any hope of survival from these anarchists who which represented a race in the animal kingdom that we believed was harmless. My next story is 'A message from the Pig-Man' by John Wain. This story is set in early 1900s in what seems to be the city of London. This story is about a young boy called Eric of around the age of six. His parents are separated and he lives with his Mum and her boyfriend, Donald. Eric always imagines that the Pig-Man is almost like a character from a horror story. When he first heard about the Pig-Man, he started to ponder what the Pig-Man would look like. He concentrates various prospectives about the image of the Pig-Man, "The Pig-Man's bucket had a handle; so he must carry it in the ordinary way, in his hand-unless, of course, and he walked on all fours and carried it in his mouth. ...read more.

He causes Eric to behave in a ridiculous way but not for a child. At the start the Pig - Man's character is almost mysterious, as the adults do not tell us what his image is like; we only hear Eric's knowledge of the Pig - Man that is at the minimum. Eric's dad is the one who confuses Eric about buying the train set and then leaving which leads to Eric questioning why him and Donald can't stay with Eric and his mum. The vernacular in this short story is evocative towards what perceptions you can have about someone or something when at a young age or unaware of the purpose or the appearance of an individual. What is interesting about these two stories is that they deal with problems that the characters must face for themselves and overcome; one the boy doesn't understand why the dad and the mum's boyfriend (Donald) can't live together and he doesn't understand the term 'Pig - Man'. And the other is that Nat doesn't understand why the birds are attacking the Village and the world. He finds out when they time their attacks when he realises it had something to do with the tides. ...read more.