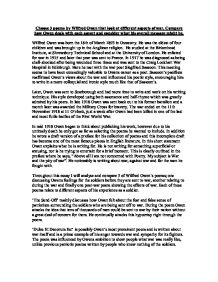 Choose 3 poems by Wilfred Owen that look at different aspects of war. Compare how Owen deals with each aspect and consider what his overall message might be.

Choose 3 poems by Wilfred Owen that look at different aspects of war. Compare how Owen deals with each aspect and consider what his overall message might be. Wilfred Owen was born the 18th of March 1893 in Oswestry. He was the eldest of four children and was brought up in the Anglican religion. He studied at the Birkenhead Institute, at Shrewsbury Technical School and at the University of London. He enlisted for war in 1915 and later that year was sent to France. In 1917 he was diagnosed as being shell-shocked after being wounded three times and was sent to the Craig Lockhart War Hospital in Edinburgh. Here he met with the war poet Siegfried Sassoon. This meeting seems to have been exceedingly valuable to Owens career as a poet. Sassoon's pacifism reaffirmed Owen's views about the war and influenced his poetic style, encouraging him to write in a more colloquial and ironic style much like that of Sassoon's. Later, Owen was sent to Scarborough and had more time to write and work on his writing technique. His style developed using both assonance and half-rhyme which was greatly admired by his peers. In late 1918 Owen was sent back out to his former battalion and a month later was awarded the Military Cross for bravery. The war ended on the 11th November 1918 at 11 O'clock, just a week after Owen had been killed in one of the last and most futile battles of the First World War. ...read more.

The beginnings of both poems involve soldiers supposedly marching to their fate. The difference between the two however, is that in 'The Send-Off' they don't know what is happening as such, whereas in 'Dulce Et' they are fully aware. 'Dulce Et' is set right in the centre of the war and the opening images we have are of soldiers "coughing like hags", cursing "through sludge" and there is definitely not the same celebratory an uplifting scene that was set at the beginning of the send off. The image we get from the first few lines is obviously nothing like that of the lie that the British Expeditionary Force portrayed it would be like. The men are walking "like old beggars under sacks" giving us a clear image of exhausted soldiers and even when walking for rest they are unable to move quickly. Suddenly the mood of the poem changes at the phrase, "Gas! Gas! Quick, boys - An ecstasy of fumbling". This is our first example in 'Dulce Et' of Wilfred changing emotions abruptly and the layout of the line alerts us and just like war itself, the poem is unexpectedly changing throughout. The repetition of the short word, "Gas!" in two short stabs followed by, "Quick, boys - An ecstasy of fumbling" clearly shows us an image of the men fumbling around in an "ecstasy" and "Fitting the clumsy helmets just in time". ...read more.

"The old Lie: Dulce et decorum est, Pro patria mori." means it is sweet and honorable to die for one's country and is a rather ironic line as it opposes the message he has been portraying throughout the whole play. Much alike 'Dulce Et Decorum Est' and 'The Send-Off', 'Disabled' also finishes in a negative way. Throughout the whole play we have had the split image of this man, disabled as an outcome of war. The picture of a brave soldier being cheered off to war, and that of a crippled old man returning home receiving more a cheer of pity rather than respect. This is further explained in the phrase, 'Some cheered him home, but not as crowds cheer Goal.' The final line is a rhetorical question, 'And put him into bed? Why don't they come?' summing up the apathy that people felt towards the man and showing that he had been forgotten. All 3 poems are different, however extremely similar in particular ways. There is clearly a relationship between much of Owens work as he uses various effective similar techniques to influence our sympathy towards those who lived and died and our hate for the war that caused it. Whilst Owen wrote the majority of his poems on a personal basis, he has been arguably the most prominent war poet and has intrigued both poets and readers for years. ...read more.

This is an excellent essay which includes biographical detail which gives further insight into the contextual factors of the poems. Very good use of literary terminology and PEE is used throughout which enforces the perceptive and thoughtful comments. The writer clearly understands how the poet has crafted these poems and analyses the language and structure in detail.