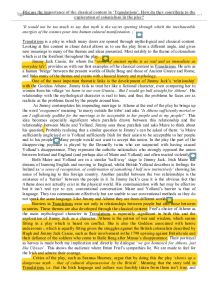 Discuss the importance of the classical content in 'Translations'. How do they contribute to the exploration of colonialism in the play? 'It would not be too much to say that myth is the secret opening through which the inexhaustible energies of the cosmos pour into human cultural manifestation. 1' Translations is a play in which many doors are opened through mythological and classical content. Looking at this content in closer detail allows us to see the play from a different angle, and gives new meanings to many of the themes and ideas presented. Most notably to the theme of colonialism which is at the forefront throughout the play. Jimmy Jack Cassie, for whom the 'world of ancient myths is as real and as immediate as everyday life', provides us with our first examples of the classical content in Translations. He acts as a human 'bridge' between the present worlds of Baile Beag and those of Ancient Greece and Rome, and links many of the themes and events with classical history and mythology. One of the most important thematic links is the development of Jimmy Jack's 'relationship' with the Goddess Athene. Jimmy fails to treat her like a fictional character, even comparing her to women from his village 'no harm to our own Grania... But I would go bull straight for Athene'. ...read more.

These themes are also developed through the classical content. Friel's choice of Athene as the main mythological character in Translations is especially significant in both this and the exploration of Jimmy Jack as a character. Athene is the patron of war and wisdom, which seems fitting in a play which is based on conflict. She is also the Goddess associated with heroic endeavours 1, which is equally fitting given the struggles against the British colonialists described by Hugh and Jimmy Jack Cassie, such as their involvement in the 1798 uprising against British rule and their defiance of the soldiers who come to Baile Beag after Manus's disappearance. Their portrayal as heroes is made both my implication and directly by dialogue 'we got homesick for Athens, just like Ulysses'. This shows the audience where Brian Friel's sympathies lie. We are made to feel for the Irish and admire their courage. Critics of the play, such as Seamus Hearney, argue that by doing this the play 'shores up a dangerous myth - that of cultural dispossession by the British'. Meaning that the story told in Translations, i.e. that the Irish language and culture was forcibly taken from them isn't true, and gives us a skewed view of the process of colonisation. However it could be that this isn't Friel's whole intention. ...read more.

The descendants of Aeneas conquered Carthage and colonised it, making it part of the Roman Empire during the Punic wars2. It also carries with it the idea that all civilisations are one day fated to end. This interpretation matches Ireland with Carthage and Rome with the English colonists. Astrid Van Wayenberg3expands this idea with making a connection between Ireland and a second race that 'sprung from Trojan blood, the English descendants of Aeneas's grandson Brutus', this race seems now to be fated to destroy the Irish culture. A second idea, put forward by Alan Peacock is that when Hugh stumbles at the end of the passage it is because he is imagining that 'just as Rome traced its ascendancy from the ashes of Troy, so will Ireland at some time renew herself'. This interpretation however seems unlikely when put into context with the rest of Hugh's comments. Realising that mythology is often very different from the real world Hugh sums up one of the most important conclusions in the book, as he seems to resign himself to the fate of his culture. 'We must learn where we live. We must learn to make them [the new place names in the name book] our own. We must make them our new home.' 1. The Hero with a Thousand Faces, Joseph Campbell 2. www.wikepedia.org 3. The Achievements of Brian Friel, Edited by Alan Peacock 4. Astrid Van Weyenberg, www.americanstudies.wayne.edu Suraiya Banu ...read more.

A very articulate, perceptive commentary, which shows excellent knowledge of text, critical response and classical as well as Irish contexts. *****