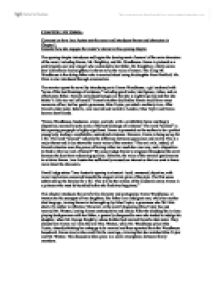 Comment on how Jane Austen sets the scene and introduces themes and characters in Chapter 1.

CHAPTER 1 OF EMMA: Comment on how Jane Austen sets the scene and introduces themes and characters in Chapter 1. Consider how she engages the reader's interest in this opening chapter. The opening chapter introduces and begins the development of several of the main characters of the novel, including Emma, Mr. Knightley, and Mr. Woodhouse. Emma is pictured as a pretty twenty-one year old girl who is devoted to her father. Mr. Knightley, a thirty-seven year old bachelor and neighbour is shown to be the voice of reason. The ailing Mr. Woodhouse is the doting father who is worried about losing his daughter from Hartfield. Mr. Elton is also introduced through conversation. The narrator opens the novel by introducing us to Emma Woodhouse, a girl endowed with "some of the best blessings of existence," including good looks, intelligence, riches, and an affectionate father. Emma's only disadvantages are that she is slightly spoiled and that she thinks "a little too well of herself." Emma's mother died before Emma could form many memories of her, but her gentle governess, Miss Taylor, provided a motherly love. After Emma's older sister, Isabella, was married and moved to London, Miss Taylor and Emma became best friends. "Emma Woodhouse, handsome, clever, and rich, with a comfortable home and happy disposition, seemed to unite some of the best blessings of existence" The word "seemed" in this opening paragraph is highly significant. Emma is presented on the surface to be a perfect young lady, leading a comfortable, untroubled existence. However, Emma is being set up for a fall. The word "seemed" indicates the difference between appearance and reality. This is a major theme and it also shows the ironic voice of the narrator. "The real evils, indeed, of Emma's situation were the power of having rather too much her own way, and a disposition to think a little too well of herself" We cannot judge Emma's arrogance throughout the novel because she does have redeeming qualities. ...read more.

For sixteen years Miss Taylor lived with the Woodhouse family, and she became a particular friend to Emma, in spirit more a sister. Under such kind care, Emma lived, "doing just what she liked; highly esteeming Miss Taylor's judgments, but directed chiefly by her own. The real evils, indeed, of Emma's situation were the power of having rather too much her own way, and a disposition to think a little too well of herself...." Chapter 1, pg. 3 She was still a generally charming and kind-hearted young woman, and her only recent sorrow was the loss of Miss Taylor. She had married the nice Mr. Weston, and she no longer lived with the Woodhouse family. Though it was a good match, and Emma had wanted this good fortune for her governess, she could not help but feel sadness. Emma had been Miss Taylor's single charge since her sister Isabella married seven years ago, and it was hard for Emma to imagine spending her days without her. Though her new home was only a half mile from Hartfield, as Mrs. Weston she would not have the same time for Emma. And though Emma loved her father, he was not a playmate or a good conversationalist like Miss Taylor. Hartfield lies within the village of Highbury, but unfortunately there is no one in Highbury who can replace Miss Taylor in Emma's life. The Woodhouses are the most respectable family in Highbury, but Emma and her father still lead a rather solitary life. Mr. Woodhouse is a hypochondriac, fearful of any amusement. Hating change, he takes Miss Taylor's departure very hard, and Emma, though sad herself, does her best to comfort him. He had not yet grown accustomed to Isabella's marriage, and the removal of Miss Taylor made him even more depressed and disapproving of matrimony: "from his habits of gentle selfishness, and of being never able to suppose that other people could feel differently from himself, he was very much disposed to think Miss Taylor had ...read more.

The reader can see that the advice given to Harriet is poor, thus resulting in much heartache and humiliation, but we can see that this advice is only given with best intentions. Furthermore, Jane Austen's technique allows the conscious mistakes made by Emma to be followed by her shame and mortification of her actions. The light and satiric tone employed by Jane Austen softens the judgements the reader may make of the characters in the novel. Emma is intended to be a comic character therefore her character can be sympathised with rather than harshly judged upon. Instead of condemning Emma's mistakes, the reader laughs at them. The one contradiction of this is the Box Hill incident. Our judgement of Emma is harsher because the circumstance is portrayed with little humour. By humiliating Miss Bates, the reader is critical of Emma's actions and the reader's sympathy of her is blemished. This sympathy though is regained through Jane Austen's narrative style. Even in this incident Jane Austen shows Emma deep shame in her actions. Through Mr Knightley, Emma is made clear that she realises her mistake. We are only able to understand Emma's motivations that drive her actions and are unable to see the reason behind the other characters. Mrs Elton is a key example of this. She is outrageously arrogant and only serves to make the reader cringe with embarrassment at her attempts to be first lady of Highbury. Her manner is frequently frowned upon and her rationale is missed. Jane Austen's style only enables the reader to understand Emma's actions and because of this the reader is more critical of the practice embraced by the other characters. If we were able to see the reasoning behind Mrs Elton's actions, the reader to may be able to maintain sympathy for her as they do to Emma. Jane Austen's narrative technique draws the reader to Emma as the motivation for her thoughts; emotions and actions are fully displayed to us. Even above characters that consistently behave in the appropriate manner, the reader is able to see beyond Emma's mistakes and maintain sympathy for her. ...read more.