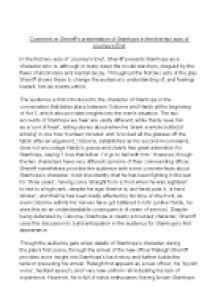 Comment on Sherriff's presentation of Stanhope in the first two acts of Journey's End.

﻿Comment on Sherriff?s presentation of Stanhope in the first two acts of Journey?s End In the first two acts of ?Journey?s End?, Sherriff presents Stanhope as a character who is, although in many ways the model war-hero, plagued by the flaws of alcoholism and mental decay. Throughout the first two acts of the play Sherriff shows these to change the audience?s understanding of, and feelings toward, him as events unfold. The audience is first introduced to the character of Stanhope in the conversation that takes place between Osborne and Hardy at the beginning of Act 1, which also provides insights into the men?s situation. The two accounts of Stanhope we hear are vastly different; while Hardy sees him as a ?sort of freak?, telling stories about when he ?drank a whole bottle [of whisky] in one hour fourteen minutes? and ?knocked all the glasses off the table? after an argument, Osborne, established as his second-in-command, does not encourage Hardy?s gossip and clearly has great admiration for Stanhope, saying ?I love that fellow. I?d go to hell with him.? However, though the two characters have very different opinions of their commanding officer, Sherriff nonetheless provides the audience with some concrete facts about Stanhope?s character: most importantly, that he has been fighting in the war for ?three years?, having come ?straight from school when he was eighteen? to rise to a high rank, despite his age; that he is, as Hardy puts it, ?a hard drinker?; and that he has been badly affected by his time on ...read more.

He looks rotten.? This contrast is again made in the characters? very different reactions to Raleigh?s ?hero worship? of Stanhope?Osborne thinks it is ?quite natural?, whereas Stanhope sneers at it, seeing it as something for ?small boys at school? only. Stanhope does not see himself as a hero, suggesting that the worship will only go on ?as long as the hero?s a hero?, and implying he believes Raleigh will no longer admire him now he has seen how he has changed. He seems to see some of the cowardice he hates in himself, commenting that if he went out to fight ?without being doped with whisky?I?d go mad with fright.? It seems that Stanhope is ashamed of who he has become, and so refuses to go home, where Raleigh?s sister Madge is waiting for him?despite expecting that it ?may not be much longer now? before he is killed. Although he is ashamed of his drinking problem?which the audience witness first-hand in this scene, as he drinks through several glasses of whisky and becomes increasingly irrational in the process?he continues to do so because he believes he?d ?go mad if [he] didn?t break the strain?. However, Stanhope fears that Raleigh is going to betray him by writing to Madge and telling her that he ?reek[s] of whisky all day?. Towards the end of the scene Sherriff presents Stanhope in a negative light for the first time; he plans to abuse his power by reading Raleigh?s letters: ?Censorship! ...read more.

However, Stanhope somewhat redeems himself during the rest of the scene, showing his leadership qualities?presumably as a result of seeing that Hibbert would rather be shot then and there then go up to the fight again. We see again the extent to which he is affected by the war as he tells Hibbert ?I hate and loathe it all?. It seems that the reason Stanhope keeps on ?sticking it? is out of a sense of loyalty towards the members of his company, as he tells Hibbert ?Don?t you know it?s worth standing in with men like that?? It is clear that as well as because of his distaste for cowardice, the reason Stanhope has held on for so long is for his men; and though he must tell Osborne that he and Raleigh have to make the raid, the scene ends with him accompanying a terrified Hibbert up the steps, encouraging him ?come on, my lad.? Through Stanhope, Sherriff presents a character who is a real hero of war. Though Stanhope is undoubtedly flawed by alcoholism and mental decay, it is suggested throughout that the real hero is appreciates the horror of war yet does all he can for his fellow man; not the naive, eager Raleigh, or the oblivious Trotter. Yet in a play which is, overall, anti-war, even the hero cannot beat the odds; and, only two-thirds through the play, Sherriff has already made clear that, somehow, he will lose, as all those involved must. ...read more.