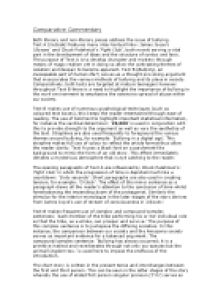 Commentary: Both literary and non-literary pieces address the issue of bullying. Text A (Outside) features many inter-textual links: James Joyces Ulysses and Chuck Palahniuks Fight Club

﻿Comparative Commentary Both literary and non-literary pieces address the issue of bullying. Text A (Outside) features many inter-textual links: James Joyce?s ?Ulysses? and Chuck Palahniuk?s ?Fight Club?, both novels serving a vital part in the development of ideas and the structure of syntax and lexis. The purpose of Text A is to develop character and mystery through means of magic realism yet in doing so allow the contrasting themes of isolation and despair to become apparent. Text B (Bullying- an inescapable part of human life?) serves as a thought provoking argument that incorporates the various methods of bullying and its place in society. Comparatively, both texts are targeted at mature teenagers however throughout Text B there is a need to highlight the importance of bullying in the work environment to emphasise the extensive spread of abuse within our society. Text B makes use of numerous graphological techniques (such as coloured text boxes), this keeps the reader entertained through ease of reading. The use of bold text to highlight important statistical information, for instance the cardinal determiner: ?20,000? is used in conjunction with this to provide strength to the argument as well as vary the aesthetics of the text. ...read more.

The single use of direct speech, ?Did you miss us?? connotes isolation surrounding the protagonist. This theme is further intensified through the use of the passive voice: ?is pinned to the wall? as it portrays the protagonist as a victim as well as make the reader question why he is in the situation. 504 words Dissimilarly Text B consistently uses the present tense with use of the implied future in the modal: ?we can prevent?, in the concluding paragraph. This is appropriate for this style of writing as the use of implied future, paralleled with frequent use of the inclusive plural: ?we?, gives a sense of unison and responsibility. To exaggerate the impact on the reader, Text B uses a high register: polysyllabic lexis such as the modifying adjective ?fundamental? and stative verbs ?perceived?, ?maintained? give sequence to the article. Following on from this, Text B creates emphasis by using repetition: the finite verb, ?to dominate?, the transitive verb: ?dominating? and the abstract noun: ?dominance?. In Text A, the repetition of the noun phrase: ?Nothingness; absolute nothing? No tunnel, no bright lights. Just nothing?? serves as a vital mechanism in engaging the reader. ...read more.

The frequent use of emotive adjectives are also comparable; adjectives such as ?tragic? and ?detrimental? are used to create a parallel between the theme of bullying and society in Text B. 993 words Text A uses onomatopoeia to impose the vividness of the chase: ?CRASH?. The use of this dynamic verb startles the reader and creates a greater involvement with the story. Text A makes frequent use of fricative and plosive alliteration: ?scent of stale cigarettes?, ?faster and faster?. This represents the varying tones of the story, for example, the use of the fricative: ?faster and faster? depicts the fast pace of the passage hence compelling the reader to continue. Text B also features similar phonological techniques to emphasise the importance of certain arguments. For example: ?supposedly, socially developed and sophisticated?? the use of sibilance here intensifies the use of the interrogative thus allowing the reader to reflect on the denoted topics. Both texts depict the theme of bullying. However the ways in which these texts portray this theme vary immensely: Text A depicts the microcosm- the life of a struggling protagonist and the surrounding themes of isolation. Text B however illustrates the impact of bullying in society: the macrocosm. And it is through this juxtaposition that allows the similarities and comparisons between form, syntax, lexis and phonology to be made. 1159 words ...read more.