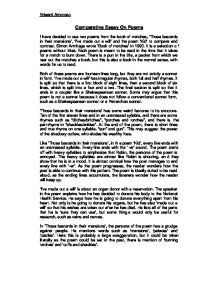 Comparative essay on poems from the 'Book of matches'.

Comparative Essay On Poems I have decided to use two poems from the book of matches, 'Those bastards in their mansions', 'I've made out a will' and the poem 'Kid' to compare and contrast. Simon Armitage wrote 'Book of matches' in 1993. It is a selection of poems without titles. Each poem is meant to be read in the time that it takes for a match to burn down. There is a pun in the title, a packet from which we tear out the matches a book, but this is also a book in the normal sense, with words for us to read. Both of these poems are fourteen lines long, but they are not strictly a sonnet in form. 'I've made out a will' has irregular rhymes, both full and half rhymes. It is split so that there is a first block of eight lines, then a second block of six lines, which is split into a four and a two. The final section is split so that it ends in a couplet like a Shakespearean sonnet. ...read more.

He lists all of the parts that he is 'sure they can use', but some things would only be useful for research, such as veins and nerves. In 'Those bastards in their mansions', the persona of the poem has a grudge against people. He mentions words such as 'mansions', 'palaces' and 'castles'. Here this is probably a large exaggeration, but it could be taken literally as the poem could be set in the past, there is mention of 'burning torches' and 'cuffs and shackles'. Like in 'Those bastards in their mansions', in 'Kid', Robin has a grudge against Batman. Simon Armitage imagines that Robin has separated from Batman and that he has succeeded and that Batman has turned into a failure. It says how Batman has 'nothing in the walk-in larder'. This is the opposite to 'Those bastards in their mansions' because in that poem the persona has nothing compared to the people he has a grudge against and is jealous. At the end of the first eight-line section, the speaker concludes his list with the one exception, 'but not the heart, they can leave that alone'. ...read more.

In the last two lines he says how he does not want his heart to be touches, he compares this with 'the pendulum, the ticker'. These are the parts of the clock that makes everything work, just like the human heart. In this passage, Simon Armitage uses lots of metaphors. This is to emphasise points. For example, he uses not only 'pendulum', but also 'ticker' to talk about the heart. Throughout this poem the poet describes the human body merely as lots of parts, he shows no emotion towards anything apart from the heart. This could be because the speaker sees the heart as being the most important part of a mechanism, like a pendulum in a clock. It also maybe that he values the heart as a symbol of all things that make life worth living, a heart is the symbol of love, affection, energy, desire, and much more. Or, perhaps he feels that he is inside his heart, and it is like a soul, and if he gives up his heart then he is giving up his immortality. Edward Amoroso ...read more.