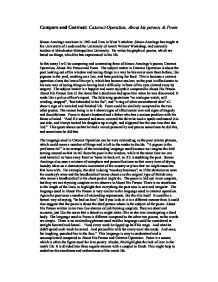 Compare and Contrast - Cataract Operation, About his person, &amp; Poem

Compare and Contrast: Cataract Operation, About his person, & Poem Simon Armitage was born in 1963 and lives in West Yorkshire. Simon Armitage has taught at the University of Leeds and the University of Iowa's Writers' Workshop, and currently teaches at Manchester Metropolitan University. He writes biographical poems, which are based on things, which he has experienced in his life. In this essay I will be comparing and contrasting three of Simon Armitage's poems, Cataract Operation, About His Person and Poem. The subject matter in Cataract Operation is about the poet looking out of his window and seeing things in a way he has never seen them before, like pigeons in the yard, washing on a line, and hens pecking for food. This is because a cataract operation clears the lens of his eye's, which has become unclear, so the poet is affectionate to his new way of seeing things to having had a difficulty in front of his eyes cleared away by surgery. The subject matter is a happier and more enjoyable compared to About His Person. ...read more.

The poem is laid out in ten couplets, but they are not rhyming couplets as we observe in About His Person. There is no steadiness in the length of the lines, to highlight that everything the poet sees is new and irregular. The language used in About His Person is very similar to the language used in cataract operation. Again the poet uses a number of misleading expressions, like the title itself. It could be a formal way of saying, "he had on him", but if you look at it in a different manner then it could also suggest that the poem is about the dead person whom is the subject of the poem. About His Person written in ten two-line stanzas called rhyming couplets. They are short and accurate, just like the notes that a detective might make if he or she was investigating a dead body. The language used in Poem is different compared to the other two poems, as the words are simple. There is no misleading phrases used and the language could be considered as straight forward and formal. ...read more.

The police do not get emotionally involved in cases like these, as they gather the bare facts and leave the feeling out, but we sympathise for the man as we believe he was forced to kill himself and we see him as a victim of love and deceit. Poem can in a way be similarly compared to Cataract Operation because it tries to prove a point and produce a moral. The way Simon Armitage tried to make people aware of the beauty of our world in Cataract Operation is similar to the way he tries to make the man in Poem represent the ordinary gentlemen and set a message that sometimes you might do this, and sometimes you might do that. In this poem Simon Armitage does not actually condemn the man for all the things he did wrong; he simply lists the mistakes and leaves us to represent them. Overall I think that About His Person and Poem are similar because they both include the story of a man, whom is involved in marriage and both men have suffered from a problem and in this essay I have fully compared and contrasted all three of Simon Armitage's poems. Irfan Ahmed 11.1GS ...read more.