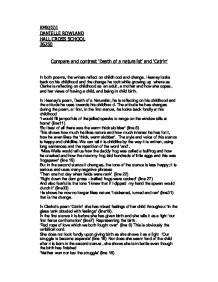 Compare and contrast 'Death of a naturalist' and 'Catrin'

KMK(G)1 DANIELLE ROWLAND HALL CROSS SCHOOL 36250 Compare and contrast 'Death of a naturalist' and 'Catrin' In both poems, the writers reflect on childhood and change. Heaney looks back on his childhood and the change he took while growing up where as Clarke is reflecting on childhood as an adult, a mother and how she copes, and her views of having a child, and being in child birth. In Heaney's poem, Death of a Naturalist, he is reflecting on his childhood and the attitude he uses towards his childhood. The attitude he has changes during the poem, at first, in the first stanza, he looks back fondly at his childhood 'I would fill jampotfuls of the jellied specks to range on the window sills at home' (line11) 'But best of all there was the warm thick slobber' (line 8) This shows how much he likes nature and how much interest he has for it, how he even likes the 'thick, warm slobber'. The style and voice of this stanza is happy and childlike. We can tell it is childlike by the way it is written, using long sentences and the repetition of the word 'and', 'Miss Walls would tell us how the daddy frog was called a bullfrog and how he croaked and how the mammy frog laid hundreds of little eggs and this was frogspawn' (line 15) ...read more.

For example in Death of Naturalist to make to stanza two seem serious and to show he thinks it is 'disgusting' Heaney uses words that create a negative image 'Right down the dam gross- bellied frogs were cocked' (line 27) The underlined words create a negative feeling. He uses this often throughout the poem 'Poised like mud grenades, their blunt heads farting' (line30). Clarke also uses this method in Catrin, 'It was a square an environmental blank, disinfected of toys and paintings' (line10) this shows how lonely and plain the room was, how it was blank and bare, the word 'disinfected' creates an uneasy feeling, as dirty, nasty things have a need to be disinfected.this surely would make anyone feel uncomfortable. They use the same method to make phrases create a happy, positive image in the readers mind. Heaney puts both negative and positive words into the same phrases and lines 'Bubbles gargled delicately, blue bottles (line 5) This shows that Heaney liked the disgustingness of nature, as 'bubbles' and 'delicately' create positive images where as 'gargled' and bluebottles, which or unclean flies, create negative images. Catrin does this also 'Trailing love and conflict', love being positive and conflict being negative. ...read more.

us how the daddy frog was called a bullfrog and how he croaked and how the mammy frog laid hundreds of little eggs and this was frogspawn' (line 15) Obviously his teacher from when he was younger. Clarke shows that she is looking back on her past, she is looking back at the birth of her daughter, but then comes back to the present in her poem 'I can remember you child' 'Still I am fighting' When I read Death of a Naturalist by Seamus Heaney, I felt he had described the atmosphere and his feelings wonderfully, he showed how he was interested in nature. I thought he showed clearly that he was looking back on his childhood, and how his feelings towards nature changed. I got many negative images from this poem, which I think was the aim, to show what he saw and felt. In Catrin by Gillian Clarke I could very well imagine a woman in a white disinfected hospital room lonely and confused at first, then fighting to give birth. I can imagine how she feels towards the baby, and then the child more grown up, how they still fight, and how she struggles to cope with her daughter. I can see how she feels as she has shown her feelings so well. ...read more.

This candidate makes a good effort, but the essay is not very well written and the points are difficult to understand either through a bad articulation or simply a poor understanding of the poem and how to construct effective poetic ...

This candidate makes a good effort, but the essay is not very well written and the points are difficult to understand either through a bad articulation or simply a poor understanding of the poem and how to construct effective poetic analysis. The candidate makes a fair analysis of the tones and some poetic devices (metaphors, similes) but does not make any obvious comparison between the two poems because the discuss them separately rather than together. To counter this, I would recommend the candidate work on a different structure - rather than attempting to answer Poem-by-Poem, try Point-by-Point, as this would encourage more comparison more easily. This structure would see the candidate try something like analysis of the use of the theme of childhood - what do both poets say about it? How fondly do they look back at childhood? What are their thoughts about their memories? This could incorporate tone, imagery etc. The next point would be something like the structure - what do the stanza breaks tell us? Discussing in this fashion naturally encourages more comparative analysis as one poem can be analysed directly after the other by referring to the same analytical point.

The candidate's Level of Analysis is generally poor. The candidate makes some analysis of the language used but very rarely makes any active comparisons or discusses to a fair extent any other poetic device, such as structure or the use of unpleasant imagery. As the question directs candidates to "Compare and contrast" between Gillian Clarke's 'Catrin' and Seamus Heaney's 'Death of a Naturalist', the candidate cannot earn higher than a high D grade for A Level. I would recommend the candidate becomes more familiar with the tools of poetic analysis, and how to effectively analyse language, imagery and structure in terms of the relevance to the poem. Commenting literally on what the poem shows does not win any marks, neither does "In Catrin there is a sense of town" - a "sense of town" is perhaps not the best phrasing, and nor is it particularly relevant as it is not something that can be compared to 'Death of a Naturalist'. Candidates must make sure that their analysis is to-the-point and relevant to the question proposed to them, because even illuminating analysis that lies adrift of what the mark scheme outlines will not earn marks.

The Quality of Written Communication (QWC) is below average. The candidate's clarity is fair, but their written expressions are often confusing and their intentions for analysis unclear ("sense of town" being a good example). Candidates must self-regulate checks for appropriate spelling, punctuation and above all grammar, because if the examiner fails to be able to understand what the candidates are trying to say they will not receive any QWC marks. Some spell-checkers and grammar-checkers on computers often miss simpler errors like misspelling a word so it spells another, and these need to be identified and rectified.