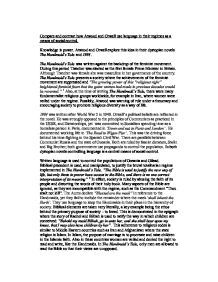 Compare and contrast how Atwood and Orwell use language in their regimes as a means of social control.

Compare and contrast how Atwood and Orwell use language in their regimes as a means of social control. Knowledge is power. Atwood and Orwell explore this idea in their dystopian novels The Handmaid's Tale and 1984. The Handmaid's Tale was written against the backdrop of the feminist movement. During this period Thatcher was elected as the first female Prime Minister in Britain. Although Thatcher was female she was masculine in her governance of the country. The Handmaid's Tale presents a society where the achievements of the feminist movement are suppressed and "The growing power of this "religious right" heightened feminist fears that the gains women had made in previous decades would be reversed." 1 Also, at the time of writing The Handmaid's Tale, there were many fundamentalist religious groups worldwide, for example in Iran, where women were veiled under the regime. Possibly, Atwood was warning of rule under a theocracy and encouraging society to promote religious diversity as a way of life. 1984 was written after World War 2 in 1948. Orwell's political beliefs are reflected in the novel. He was strongly opposed to the principles of Communism as practiced in the USSR, and Dictatorships, yet was committed to Socialism spending time as a homeless person in Paris, documented in 'Down and out in Paris and London'. He documented working life in 'The Road to Wigan Pier'. ...read more.

The Party controls the language they are allowed to use and this gradually eliminates most of the Oldspeak dictionary so that the Party members no longer know words other than those created by the Party in the Newspeak dictionary. Newspeak is a new language that proposes to abolish as many unnecessary words as possible in an attempt to eradicate dissent. They are 'cutting the language down to the bone'. The removal of knowledge and capacity for thought is key to preventing the creation of dissidents. The populations in both novels are told what to think say and do. Both protagonists are wary of who they talk to and fear being caught saying the wrong thing. In 1984 Winston is careful of what he says to Syme and he concludes that 'One of these days...Syme will be vaporized. He is too intelligent'. In this dystopian society language and knowledge are detrimental to the survival of people in the society. Even paralinguistic features are dangerous. When Nick is first introduced in The Handmaid's Tale he winks at Offred and Offred instantly assumes that "Perhaps it was a test...Perhaps he is an Eye". Professionally, Winton is a revisor of the past. He re-writes history so that it matches the 'current party line'. In 1984 the act of 'facecrime' can result in imprisonment.Offred's occupation before the regime took over was in the transfer of hard copies of books to electronic copies. ...read more.

There is a further reconstruction as Professor Pieixoto reconstructs Offred's narrative. The 'Historical Notes 'are a structural device to show that the regime has been overthrown as it is set in the future where people are discussing what happened in Gilead in the past. Similarly, the appendix in 1984 is written in the past tense, showing that Newspeak is a thing of the past. The 'Historical Notes' show that sexism is still alive in society as the language used is full of sexual innuendo. Professor Pieixoto makes sexist jokes such as using the terms 'tails' and 'frailroad' during his speech and we are led to believe that his views reflect the views of society. "The Professor neglects the most crucial element on this story: Offred herself".11 The Professor focuses on the identity of the Commander as opposed to the struggles that Offred faced in the patriarchal Gilead. He does not take Offred's account as fact and sidesteps "the critical moral issues raised by her account" 12. Offred's narrative is an episodic one. It is not in chronological order like Winston's in 1984. Atwood does not use a linear narrative as if she did she would not be able to tell Offred's story fully and she enjoys giving tiny snippets of information about Offred's past enticing us to read more. Atwood and Orwell astutely exploit language as it reflects a crucial element of civilisation. Both novels warn against the possibility of a dystopian future and how easily it can happen. ...read more.