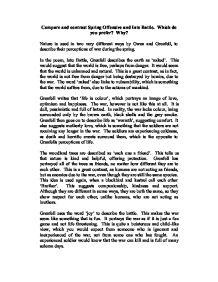 Compare and contrast Spring Offensive and Into Battle. Which do you prefer? Why?

Compare and contrast Spring Offensive and Into Battle. Which do you prefer? Why? Nature is used in two very different ways by Owen and Grenfell, to describe their perceptions of war during the spring. In the poem, Into Battle, Grenfell describes the earth as 'naked'. This would suggest that the world is free, perhaps from danger. It would seem that the world is unharmed and natural. This is a great contrast, as in fact, the world is not free from danger but being destroyed by bombs, due to the war. The word 'naked' also links to vulnerability, which is something that the world suffers from, due to the actions of mankind. Grenfell writes that 'life is colour', which portrays an image of love, optimism and happiness. The war, however is not like this at all. It is dull, pessimistic and full of hatred. In reality, the war lacks colour, being surrounded only by the brown earth, black shells and the grey smoke. Grenfell then goes on to describe life as 'warmth', suggesting comfort. ...read more.

This quotation suggests that the soldiers are safe and at peace, during the night. It links to death, as once dead, you are no longer in any danger. Swans keep cygnets in their wings, suggesting protection and new life. In Spring Offensive, Owen begins the poem with the soldiers at a 'last hill'. This shows that the soldiers are exhausted and cannot take any more. It also suggests that they may be about to come to the end of their lives, and the hill will be the last one that they ever walk over. He then portrays the soldiers exhaustion, when 'their feet had come to the end of the world'. This shows how horrific the war is and to what extent that they are tired, as their feet are so worn out. The world does not really have an end, physically, but has been used here psychologically to show that not only the soldiers' bodies are worn out, but their minds are too. ...read more.

Hell links to fire, which would be common in a war, due to the bombs. Owen shows that one must have 'superhuman inhumanities' to survive in the war. Soldiers need to be better than normal at something if they have any chance of survival. In this case they need to be able to kill successfully to enable that they are not killed themselves. Owen shows how it is almost impossible to survive the battlefield, through this quotation. He also describes the war as being full of 'immemorial shames', suggesting that the war is full of unforgivable things that you have to do. In conclusion, it is evident that Grenfell has used spring to portray the war as a heroic and enjoyable event. He does not show the realities of the battlefield, as Owen does. Spring Offensive is very different, as spring has been used to show the extent of the horrors that take place. It shows that the war is not glorious or adorable, like Grenfell views it to be. In my view, I prefer Spring Offensive as I feel that it portrays the war realistically, without avoiding detail. ...read more.