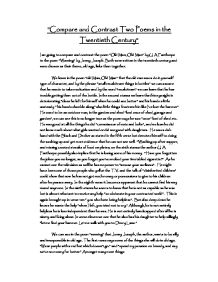 Compare and contrast the poem &quot;Old Man, Old Man&quot; by U A Fanthorpe to the poem &quot;Warning&quot; by Jenny Joseph. Both were written in the twentieth century and were chosen as their theme, old age, links them together.

"Compare and Contrast Two Poems in the Twentieth Century" I am going to compare and contrast the poem "Old Man, Old Man" by U A Fanthorpe to the poem "Warning" by Jenny Joseph. Both were written in the twentieth century and were chosen as their theme, old age, links them together. We learn in the poem "old Man, Old Man" that the old man was a do it yourself type of character, and by the phrase "small recalcitrant things in bottles" we can assume that he needs to take medication and by the word "recalcitrant" we can learn that he has trouble getting them out of the bottle. In the second stanza we learn that his eyesight is deteriorating "clues he left for himself when he could see better" and his hands a little unsteady " his hands shamble along" also little things frustrate him like I've lost the hammer" He used to be an outdoor man, in the garden and shed "lord once of shed, garage and garden", we can see this is no longer true as the poem says he was "once" lord of shed etc. He was good at all the things he did "connoisseur of nuts and bolts", and we lean he did not know much about what girls wanted or did nor good with daughters. ...read more.

This leads her to the last stanza where she starts to think, why should I wait until I get old? "Maybe I ought to practice a little now?" however she stops her line of thought as she realises that this may be acceptable when you are old but definitely not when you are younger! The language and structure of poem one "Old Man, Old Man" are quite simple. There are ten equal length verses plus an eleventh which is shorter. I believe this is because the last verse is the author's own contribution to the poem and is meant to stand out from the rest. The language is simple as it is a simple theme and does not need complicating. The verses end in a middle of a sentence rather than each verse stats a new sentence. There is a bit of personification in the first line "recalcitrant things in bottles." The rest of the poem is fairly simple as there is no rhythm or rhyme. The language and structure of poem two "Warning" is, as with "Old Man, Old Man", fairly simple with only four stanzas all but two of which are different lengths. I expect this is because in stanza one, the longest verse, she says all the things she has planned to do in her future as an older woman these of course are all the things that she wants to do so of course there are lots of them. ...read more.

My personal response to the poem "Old Man, Old Man" is that it makes me think about my grandparents who were able and active and now have become retired and have their illnesses, this is why the poem makes me think of them. The old man in the poem was a capable man and has now become very dependant. It also makes me think that family is very important because one day you may end up with a dreadful disease and if you cannot turn to your family who can you turn to? My personal response to poem two is somewhat murky. I do not know how to put it but although it is an optimistic view of old age are the things this women wants to do that much to look forward to? I think we can do most of these things now, even as adults, but we do not because it is not advantageous and some of the things are just silly. For instance spending your pension and "say we've no money for butter". Is that logical? This is where I'm unclear may be she's saying let go out of logic! This poem also reminds me of the great Indian circle of life. This is where the native Americans believed we went round in a circle in our life. We would start life from the ground or mother, progress through childhood to become an adult then revert to being a child again, then the part to the ground. ...read more.