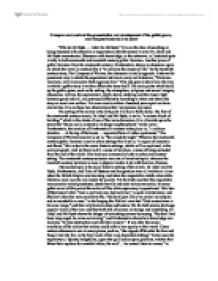 Compare and contrast the presentation and development of the gothic genre, over the past hundred or so years.

Compare and contrast the presentation and development of the gothic genre, over the past hundred or so years "If he be Mr Hyde ... I shall be Mr Seek." It is on this idea of searching or being obsessed with unknown or supernatural that Stevenson's novel Dr Jekyll and Mr Hyde concentrates. Obsession with knowledge, or the unknown, is illustrated quite vividly in both nineteenth and twentieth century gothic literature. Another piece of gothic literature from the nineteenth century, Frankenstein, shows an obsession again on which the novel is centred, this is "to examine the causes of life." In the twentieth century story, The Company of Wolves, the obsession is totally opposite. It shows the passionate way in which the supernatural strives to carry out its desires, "Carnivore incarnate, only immaculate flesh appeases him." This just goes to show how the time in which a gothic story is written affects the story itself. The main points which build up the gothic genre, such as the setting, the atmosphere, religious and sexual imagery, obsessions, victims, the supernatural, death, decay, doubling and the classic fight between good and evil, are portrayed differently according to when and where the story or novel was written. Yet even novels written a hundred years apart can have similarities. ...read more.

In the twentieth century science is used to explain everything, but even science can explain the inexplicable and supernatural. This brings me swiftly onto my third point, religious and sexual imagery. In the nineteenth century gothic novels but there are many references to religion. In Frankenstein, man replaces God and becomes the creator. But, he creates a monster whose, "unearthly ugliness rendered it almost too horrible for human eyes." "You, my creator, detest and spurn me," this describes how Frankenstein couldn't tolerate the ugliness of his creation. "I ought to be thy Adam; but I am rather the fallen angel," this shows Frankenstein and his monster in comparison with God and the devil. The fight between them is shown as that between good and evil. In Dr Jekyll and Mr Hyde, Dr Jekyll tries to be a good Christian: "Hence it came about that I concealed my pleasures," this describes how Jekyll suppressed his inner feelings to appease society. "My devil had been long caged, he came out roaring," this describes how Jekyll's inner feelings came out in the form of Mr Hyde. Yet as in Frankenstein, the monster, Mr Hyde, "gave an impression of deformity," again relating back to the devil, and how physical deformity represents mental deformity in nineteenth century texts. ...read more.

The socio-historic settings dictate what path a gothic story or novel will take. I was intrigued by how both novels used and presented each of the main pillars of the gothic genre, there were variations and similarities in the setting, the atmosphere, obsessions, religious and sexual imagery, victims, the supernatural, death, the battle between God and the devil or truth and falsehood, decay, and doubling. I loved how the nineteenth century novels defied the popular views of their time, and how the twentieth century story applied to the time at which I'm now living. I preferred reading the twentieth century story as it played on my own fears and applied to my life, even though the nineteenth century literature was riveting it didn't not play on my fears as much as the twentieth story. It is truly the socio-historic settings of a gothic novel that's governs whether it contains sexual or religious imagery and whether it plays on fears of modernisation or the supernatural or just the unnatural. But my most favourite quotation was from Dr Jekyll and Mr Hyde. It was, "man is not truly one, but truly two." I liked this quotation because I feel it to be the truth and I can relate to it. Each century adds its own unique flavour to gothic literature. ...read more.